The past few weeks have been a blur of activity. I have been teaching LEGOs to kids in Edina and St. Louis Park schools through the Youth Enrichment League. At the same time I am working a couple of days a week at the Walker Art Center.

I spent last weekend performing my biggest (and actually far too big) art hunt, which was a real struggle to accomplish given the time frame in which I have prepared. However, the Minneapolis Art Hunt was really fantastic and reported over 200 thousand hits to my website. It did not hurt, and was a nice bonus to be featured on the local WCCO news.

During the actual art hunt Matt Semke and myself met in a paint in the park art battle. This was Billy Vs Matt #10: 10 foot poles and an axe! If there was not enough going on this sleepless weekend, we picked up the ten foot poles, tapped on some paint brushes and proceeded to paint pictures from ten feet away at the Steven Square Fall Festival in Minneapolis. The best part was when we randomly chose a member of the audience (who was there to buy baked goods and watch a dog show) to chop up our artwork. See picture below: 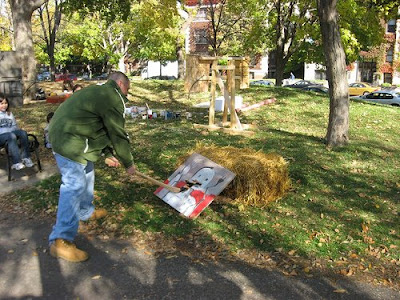 The losing artwork was voted on by the passing crowd while we painted. Make sure to read more about our art battle.


The most absurd part of this entire time period has been the stark contrast being doing a million things at once (which includes an overlap of everything going on above) and then being standing in a Walker Art Center gallery for 8 hours with only my mind to keep me occupied. I could write 20 blogs about my experience as a guard monitor at the Walker Art Center so far, and I've only been there a few weeks. The blogs would have more to do with how the center is run, what I think of the artwork, and the crazy ideas that pop into my head during the actual shifts.

The extended period of time in which I am standing in those galleries I am coming up with a million ideas, a million art projects, essay's to write, speeches to give, manifestos to draft, business plans to follow etc etc. It is really a surreal feeling to have so many varying ideas and knowing that I can only follow up with one or two of them at a time.

The reason I am writing this particular post is simply to help myself reorganize the next few weeks of my life, and understand what I am working on. By writing it here, I can also feel productive and be expressing to you what is coming next in the world of William Hessian (aka the canvas killer):

More bearded bunnies
Another batch of new bunnies are being created (currently at 70), and hand drawn variations are being sent around the country in Art-O-Mat vending machines.

I have booked a show (of which I hope are many) of my miniature drawings. I have not even started to create these little guys, since it feels like only yesterday I finished drawing the 35 miniature octopi for the minneapolis art hunt. The miniature will be shown in the Jamestown Art Center in or around February 2009.

American Politics
I am all ready to film a very short miniature art video, featuring a series of drawings which I call American Politics. I am hoping to do this in the next two weeks.

Printable Mazes
The one other small project I am working on is a series of experimental printable mazes. The idea is to be able to make these mazes free on my website for anyone to download and print off. There will be an initial run of 12 mazes, that will be small and diverse.

The list above along with a growing list of concepts and ideas that I want to accomplish in the future will be a big part of the future of this blog. I will also be featuring other Minneapolis artists, talking about my Walker Art Center experiences, and posting a whole slew of drawings and paintings which I am trying to sell on my etsy shop.
Posted by William Hessian at 10:31 PM