Masked Hornets and Other OdDities, an art show of bizarre paintings by Abbeth Russell and William Hessian (www.williamhessian.com) happened in October 2012 at the Oak Street Lofts in Portland, Maine. During this show someone walked up and stole one of my artworks right off the wall.

Before I get into the details about the sory of the stolen art, I first wanted to tell you a little bit about the actual artwork that was stolen. Abbeth Russell  (www.abbeth.com) and myself decided to do a show of all sorts of bizarre creatures, and I focused on my masker hornets. My goal was to have 3 brand new hornets ready for the show. In the weeks prior to the show, Abbeth (who is also my roommate) and myself were working constantly to get everything finished for the show. We also host a weekly ART NIGHT at our apartment where dozens of artists, musicians, writers, poets, photographers, architects show up and create work. Unsurprisingly, we were working hard on our pieces for the show on these nights. 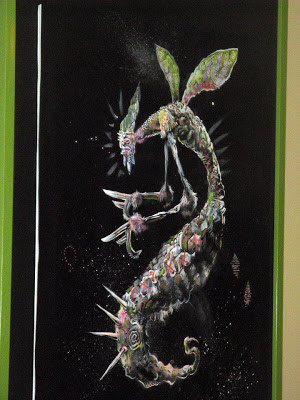 My final hornet was created overnight during one of our crazy art nights. To create the final hornet, the black paper was drawn on, painted on, olive juice was poured on it, Sighless, a talented musician (shown below) who played at the art show, and myself actually licked this painting with our tongues. We licked up a lot of the olive juice that was poured all over the art. The olive juice addition was a suggestion by someone else at art night. The end result of the hornet is what you see above. The title of the work is "Olive Hornet" and it was part of the three Masked Hornet series along with "Warrior Hornet" and "Angel Hornet". 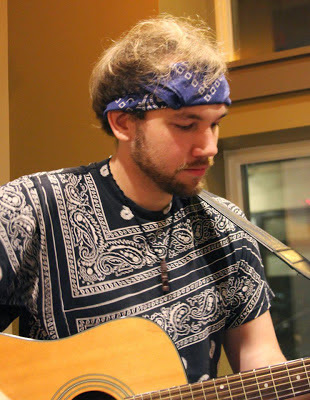 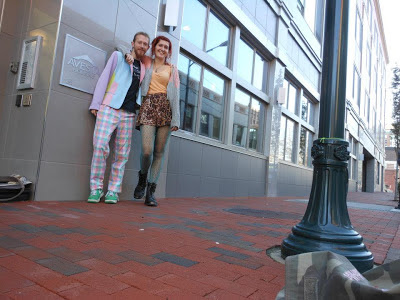 Food and drink was served, Sighless and Monica Cooper were belting out incredble sounds and the Avesta Loft showroom was jam packed with people. All of our hard work had paid off and we had attracted a near capacity crowd to come see our work. 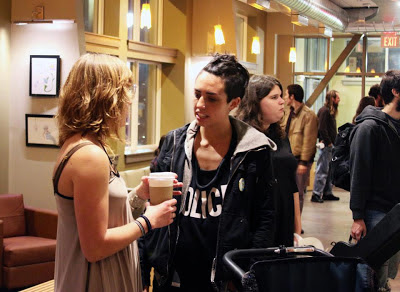 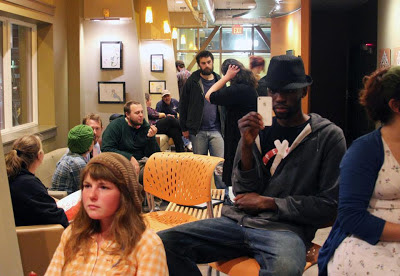 You can browze dozens of photos, including close ups of many of the artworks on display at the Photo Gallery for Rip and Tear . The show went off without a hitch and the show was set to hang for the remainder of the month. In my mind, that was the end of this story....

My friend, and Resident of the Avesta Loft, Amanda Powell sent me a text: "Did you take down one of your paintings?"
Amanda was the one who set up the show in the first place, and walked through this lobby twice a day. She was the first person to notice the missing artwork from the wall. I had no idea what Amanda was talking about so I drove by the place to see the "Olive Hornet" missing from the wall. All the other works were unharmed and untouched hanging perfectly in their spots. I shrugged my shoulders assuming maintenance had to temporarily remove the work, or perhaps the frame broke or detached and had fallen from the wall. Either way, I assumed it was not a big deal. Still, I decided to call the gallery manager to enquire. She was equally baffled by the missing artwork and being investigating.

Why in the world was the Olive Hornet missing and unaccounted for?

After a few days of asking employees of Oak Street, the gallery manager found no insight into this missing painting and told me, "Well, we do have a 24 hour camera in the gallery." Of course, this was exciting news. I told her to please check the tapes.
Amanda the following day was in the managers office for a separate reason and saw the gallery manager watching footage (apparently she had to skim hour and hours of footage before finding the incident) and as luck would have it, Amanda got to watch her find the moment when my artwork was stolen off the walls of the gallery. A tall figure, with a few friends walked up the art, peeked behind it, and then detached it from the wall at 8pm on a Friday Night. The vandals had to have access to the locked door entry and apparently the manager recognized one of the friends as a resident of the building. She contact me the next morning:

I told her I really had no interest in involving the police, and told her that I was much more interested in talking with the person who stole my work. I wanted to understand why my work was stolen, and for what purpose. However, my request fell on deaf ears. The manager wanted to be a liason between the two of us and work something out from afar. My main interest was to get information on the act itself, since is the first time one of my larger works have ever been stolen off a gallery wall. It was upsetting, yes, but by far moreso exciting to have my artwork stolen off the walls. Weeks passed by with back and fourth communications being very limited and I was forced to threaten police interaction in order to get to the bottom of the act. The next day, which was now almost two months after the art was stolen, the gallery manager told me the vandals paid full price for the artwork and that I was to expect a check in the mail.

My check arrived three days later and I had effectively sold my stolen art to the robbers that stole it, for full price. I was happy, but not altogether satisfied with the result. I wanted that survielliance tape, which I am still lobbying to get, and I wanted to talk with the one that stole my art. While the story may be over, I am still collecting the details. If I can get my hands on the tape, I will post the video here.

Posted by William Hessian at 3:25 AM