A Story about Blick Studio and Prismacolor Markers

This is a story about markers. At the same time it kind of serves as a review of fine art markers and a comparison review between Prismacolor Markers and Blick Studio Markers. If you ever ask yourself, "Which Markers should I buy?" this story might help you. 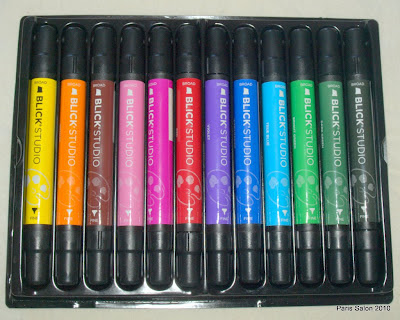 Flash forward to late 2009 in Minneapolis, Minnesota. College is over, and I am spending all my time making art. I drive to my local Dick Blick Art Materials store, as it is the art store that I frequent in my hometown. I dig into my overloaded wallet and pull out a long list of markers I need to replace the Prismacolor markers that have run dry since my last visit to the art store. My first few steps into the store I find myself in the shadow of a brand new display of Prismacolor Markers.....

but wait. These aren't Prismacolor Markers, these are brand new Dick Blick brand markers that look almost identical to Prismacolor's Marker line. On both brands of markers there is a thick tip on one end, and there is a fine tip on the other. Both sets of markers have nearly an identical list of colors, they both are the exact same size, and feel the same in your hand. The only noticeable difference at first is the price. The average Prismacolor Marker costs about 3 dollars per marker, and the Dick Blick Markers were going to be selling for 1.98 each. This is a significant difference.

I immediately parked myself in front of that display and began testing out these new markers. Do the Blick Markers work as well as the Prismacolor Markers? Are these markers as equally as quality as the Prismacolor Markers that I have grown to love? With my limited math skills I was trying to calculate how many more markers I could buy for the same price as the more expensive versions. My first experience with the new markers on the little sketchbook where you can try out the markers left me slightly dubious about the new markers. Of course, since these markers were brand new they were an additional 40% off, which meant I HAD to try them out. I was already a fan of some of the other Blick brand items like canvas, gesso, and paint brushes; so I trusted this store enough to give these markers a shot, especially since if they were comparable I would be saving myself a lot of money in the future.

The Blick Studio Markers looked just like the markers shown in the photo above, which look very similar to the Prismacolor markers. I took these markers home and began working on my projects I was slightly horrified with the results.

The Blick Studio markers colors were very nice, crisp, and vibrant. The fine tips worked almost exactly like the Prismacolor counterparts, however it was when I flipped my markers over to the thick end that the problems occurred. The very first marker I tried the tip literally came off with the cap. It was so lose into the end of the marker that you could slid it in and out, and it would slide out with gravity if you held it in writing position. I thought I had a defected marker, and I tried another marker and to my shock it also had a similar tip issue. On nearly all 12 Blick Studio markers that I purchased the bold tip (which was actually quite different than the Prismacolor bold tip in shape upon instruction) were loose and unstable in the slot. Needless to say, I was not happy about this problem and someone needed to hear about it.

The next day I was writing a long letter to the Blick store explaining to them that the markers were extremely unsatisfying and that such a big defect in the bold tip would keep me from switching over to their brand. To my surprise, only an hour later I had someone from the Blick company writing me back, who was very concerned about this problem. They asked me to drop the defected markers off at the store for a refund and assured me that these markers did not typically have these issues. Of course, I was not going to take any chances and I took my refund money and purchased the Prismacolor markers instead.

Fast forward 5 days. On my doorstep was a box. In this box was a complete set of 96 Blick Studio Markers! In the box was a letter from management apologizing for the product error and presenting me with this set of markers in order to give them another chance. This set of markers had a complete gray scale, including nearly every color that they made. I was not expecting this, and all of a sudden had quite an impressive set of markers to play with. At the very same time, I was expecting to find a similar problem with loose tips on the bold side of the markers. To my enjoyment this was not the case and the markers were functioning quite well.

Now, before I say "and me and my Blick Studio Markers lived happily ever after" I have to say that to truly review and compare these markers the story is not over. I was impressed with the Blick company being so attentive to my complaints and went the extra mile to make me consider their product line again. However, I was still going to give these markers a rigorous test before I decided if these 2 dollar markers were worth the 2 dollar, or if I would rather pay 3 dollars for the Prismacolor markers that I had been using for years. That is when the Marker Olympics began.

Okay, there wasn't really a Marker Olympics, although I think that would be a great idea to do someday. I did sit down and compare these markers back and fourth with all different kinds of projects to determine the quality of each brand. I have to say, I do think Prismacolor is still a superior marker in many ways. The ink seems a little more consistent, the construction of the marker seems to be stronger and the ink itself seems to last a little bit longer (but not by much). But the biggest difference between the two markers was the bold tip again. The tips look very different; the Blick Studio tips look like oversized white board marker tips while the Prismacolor tips have a very elegant and angled tip design. If I had one complaint for Blick Studio markers it is that the bold tip should be beefier and shaped more aerodynamically like the Prismacolor bold tip. The Blick Studio bold tips seem to break down over time and become slightly frayed, discolored and fuzzy. Sometimes the ink itself does not spread evenly from the bold tips at the end of the marker's lives. When the Prismacolor markers tips run out you get a faded color but it is more consistent and the tip is still completely in tact with no fraying.

Even with this difference, I still find myself buying Blick Studio markers more often than not and I will tell you why. For instance, if I buy 50 new Prismacolor marker each year at 3 dollar per marker, and it has roughly the same life as the Blick Studio marker, I will be spending 50% more on each new marker, which will end of costing me 50 dollars extra per year for my markers. The Blick Studio markers have a great fine tip, they last a very long time, and the bold tip, while not as good as the Prismacolor tip, is still very good, especially before it starts to run out of ink. I figure even if I replace the Blick Studio markers as soon as the marker fades or starts to fray at the bold end I am still saving myself a lot of money over time.

But this brings me to a very funny art project I saw by aritst, Daniel Eatock: 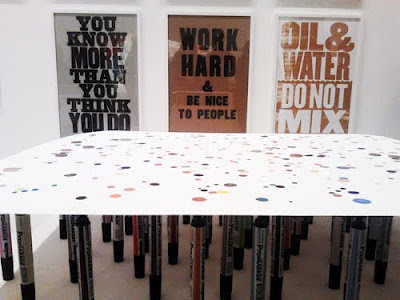 " Daniel Eatock: As one of his signature projects, Eatock takes a full set of Pantone marker pens, sets them tip-up, and lays a sheet of white paper over them, letting the colors bleed into the page and creating colorful abstraction." (source: Permanent Blog)

The project makes fun of these art markers. The art markers that were once used by graphic designers and artists all around the world. These expensive markers are quickly becoming less and less a common artist tool as the computer age is beginning to take over. This begs the question: when should I get with the times and buy a tablet.

All I know is that, whenever I do you will find a blog on the bearded bunny blog comparing the pros and cons of owning a tablet vs using fine art markers.
Posted by William Hessian at 12:19 AM

So I'm reading through your blog looking for a specific post on during your stay in Jamestown... and I come across this. The longest post I have viewed yet from the bearded bunny. An in depth review of art markers.

The passion with which these tools were analyzed and critiqued kept me reading. I just spent however many minutes of my day evaluating the worth and functionality of competing markers... :S

I'll be sure to pass on the verdict to the buyer of art supplies. Excellent customer service move by D. Blick.

Intresting story, nice to read! :) I gave digital art a shot and bought a super cheap tablet a year ago, but I think digital art is so un-personal. It feels as if I didn't drew it

Thanks Angela, I really felt it was an important story to tell. Especially since I have told it to so many artists across the country who drool over my marker collection, and I just had to share it with the artists on the internet.

Nice blog....
My 12 years old daughter is asking for prismacolor colored pencils please suggest me which have no alcohol in it.