Lutefisk Sushi- a collection of comics 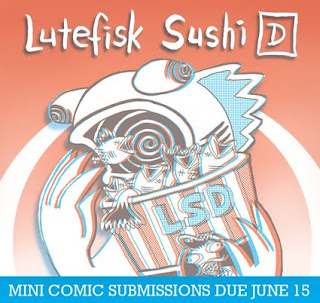 A few years ago, I was picking up art at Altered Esthetics in Minneapolis for an art show that had just closed. The show that was being set up was Lutefisk Sushi, a show featuring original local comics, mostly drawn specifically for the show. I marked my calendar hoping to take part the following year, because after a little research I found it was planned to be an annual thing.

This year, Lutefisk Sushi is on its fourth conception, or version "D" (since they are using letters to number the shows) and I am going to submit something. The guidelines are very vague and very open. The number of great comic artists in Minnesota is astonishing, and the work I have seen at the second Lutefisk show was really jaw dropping. Cartoon Conspiracy has a big hand in the organization, and they are another comic organization that I really like, and would like to get more involved with.

If you draw comics in Minnesota, you and I have until June 15th to get our submission in. I am working on mine right now, I am sure I will be posting some updates here. Check out Lutefisk Sushi website for the guidelines.

By the way, this years theme is 3-D. I remember as a little kid pulling out my red and blue crayons and drawing 3-D letters and faces. It was great. Now I can pull them out again and make my comic really stand out!
Posted by William Hessian at 1:01 AM

What a fantastic theme!