You can see all 80 photos from the sledding art battle, click here. 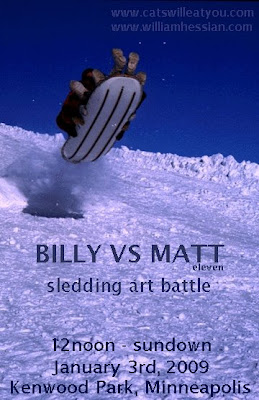 Creating art while sledding
and
freezing the losing art in blocks of ice
Artists Matt Semke and William Hessian(myself) are going to create art while sledding down Kenwood Park's King hill in Minneapolis on January 3rd, 2009. The works of art will be voted on by an onlooking crowd, who is also invited to come sledding with the artists. The event is open to the public!

The losing creations in each round will be frozen into a block of ice. The next day a sculpture of frozen artworks will be stacked to memorialize the sledding ice battle in an ice tower. The ice tower will remain on display at Kenwood park until January 17th(see image below).

In October 2008 in Minneapolis the two artists, Billy and Matt, had their tenth art battle at Steven's Square park. The battle consisted of paintings created with 10 foot poles, and the art was voted on by the onlooking crowd. The losing art was then chopped up with an axe by a random audience member.
The eleventh Billy VS Matt art battle is designed to pay tribute to the frigid weather in Minnesota, and highlight the way the culture interacts with it. Sledding is joyful occasion for children and families in the midwest, and now is becoming the vehicle to create art for these two artists. Freezing the losing artwork (which will then be on sale afterwards) and creating a temporary scultpure is a Minnesotan way to punish the art that does not get votes from the crowd, and glorifying the art that gets the votes.
On January 3rd, Billy Vs Matt 11 Sledding Art Battle is on, we hope you plan to come sledding with us! 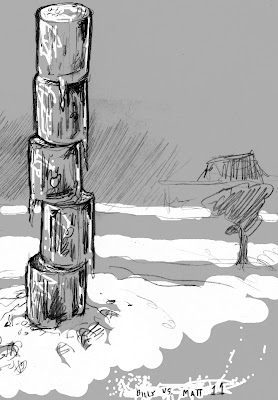 Posted by William Hessian at 2:58 PM