A Secret Look into the Hidden Ladder Lock-In

I wanted to give everyone an exclusive look at one of the greatest collection of collaborations I have ever been apart of. An experience that has proven the power of creative individuals coming together to blend their talents in order to make something larger than any individual. 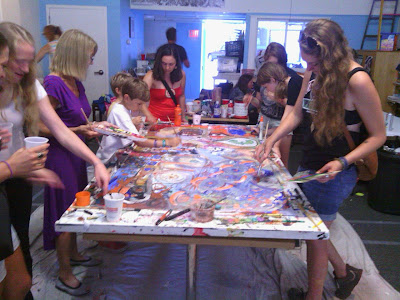 The Hidden Ladder Lock-In
Every month the Hidden Ladder Collective organizes shows for the First Friday Art Walk in Portland Maine. For the month of August it was a LOCK IN! A 12 hour painting marathon to raise money for the Meg Perry Center. Every hour the participating artists, which included a core group of 12 artists, and dozens of guests and visitors who came in to collaborate on large mixed media paintings. Each painting would only last one hour and consist of one or two simple rules. Instruments would litter the floors and live music would be played during the duration of the marathon and at the end of each painting a song would be recorded and turned into an album. From 7am until 9pm everyone who walked in the doors was invited to participate and be a part of one of the most intense collaboration efforts to happen in Portland in a long time. 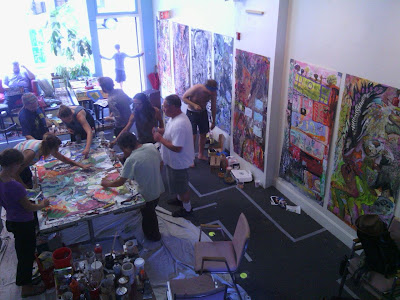 How it Started
A financial crisis had began to loom over our community center and the Hidden Ladder Collective was brainstorming ideas for a fundraiser for the next First Friday exhibit, and that is when Kara Oster mentioned to us the idea of doing a pay by hour marathon. Quickly the idea took off and Abbeth Russell began searching and inviting artists to see who could commit to an all day LOCK-IN! The idea was that each artist could ask for people to pledge money per each hour they were going to participate in the marathon, by pledging each person would get a free 6-month membership and also have a chance to win one of the 12 paintings. 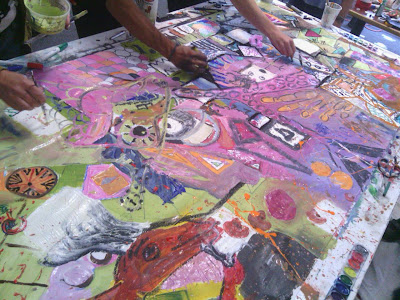 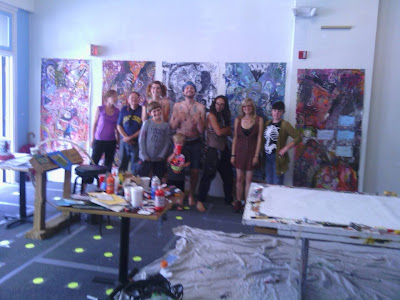 Saving the MPC
The Meg Perry Center is a peace, justice and community center that has been in Portland for over 6 years. For the last 12 months the Hidden Ladder Collective has been teaming up with the center to create interactive and exciting art shows and doing weekly open mic music events called Turnstyle Thursday. When the center announced its financial crisis many of us stepped up to help save the center. The first step was to raise money so the space could pay its rent, and the Lock-In raised 2000 dollars towards the next two months in rent! 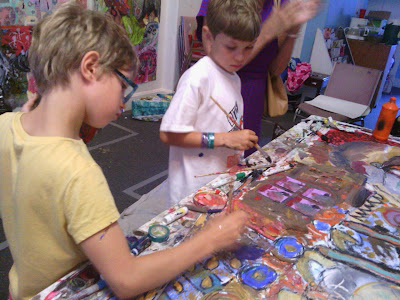 Climbing the Ladder
The Hidden Ladder Lock-In event is a perfect example of the kinds of things our collective is striving to create. A world where everyone is an artist, and everyone can work with each other to explore new ideas and new experiences together. The concept of the 'hidden ladder' is that we all have it, whether we know it or not, and once we start climbing our ladder we are taken to a place where ideas are limitless and where boundaries no longer exist. When you walk into the Meg Perry Center on any given first friday you will find artists all climbing their ladder, dancing, singing, painting, drawing, playing music. Hopefully you too will climb the ladder and join in. 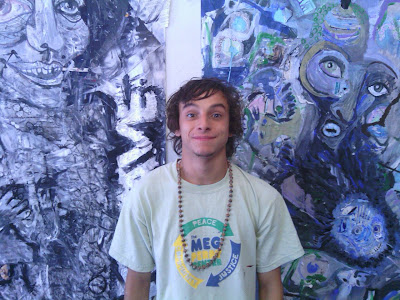 Specific Rules for each Painting
During the event the actual rules caused one artist, Zoo Cain, to quit and leave. Zoo Cain is an excellent artist and very unrestrained and creative; however the rules that where being decided by the group were too restrictive for him and in his frustration he quit altogether. While it was sad to lose Zoo for the marathon, the remaining group was really starting to find a stride. Often times we would channel our inner Zoo Cain to cause some sort of random destruction in the work just to make his presence felt, even in his absence. Here is the only place you will find all of the rules we used to create each work. 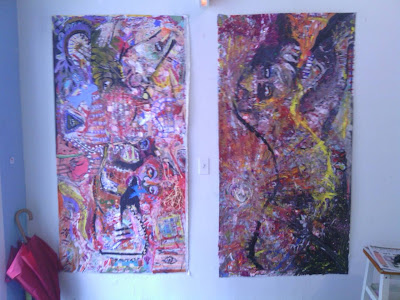 It was after hour 2 that we decided we needed some rules just to keep the paintings from becoming too similar and repetitive. We also wanted to challenge ourselves. In hour three we could only use black and white. 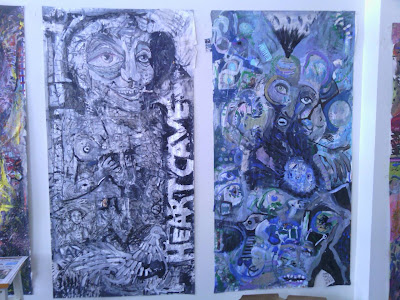 The black and white painting became my all-time favorite collaboration I have ever worked on. There was something very familiar and yet raw and powerful about that painting. "HEARTCAVE" was also a phrase that seemed very important. It was during the transition from hour 3 to hour 4 that Zoo Cain dropped the paint brush, yelled about the rules ruining everything and walked out.  We tried to cool off with blues, greens and purples. 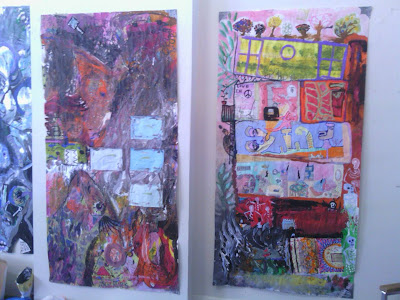 Hour 5 was an experiment in composition as we wanted to start with solid shapes and then leave all the left over white blank. 30 minutes into the painting we agreed to break the rules and go nuts. A few horse like images did eventually appear but the painting went through about 5 or 6 complete makeovers until time ran out. The 4 rectangles were a last minute addition.

Hour 6 was another experiment that Sighless had invented, where it would be a series of rectangles that would make up an apartment buinding. Each floor would be created by a different artist(s). A story began developing right away as we learned who was living in each floor and what they were all about. Plumbing, neighborial issues, and keys showed up all over the picture. A grungy basement gave the entire structure a creepy feel, but the rooftop garden was a nice touch. 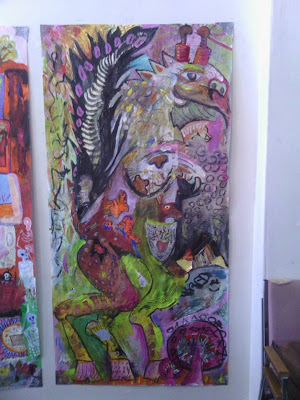 For this collaboration we decided to outline a "skunk giraffe" and then stick to that design by painting in and around the creature. I ruined the anatomy of the creature by giving it tiny chipmunk arms and then another artist added a kangaroo pouch. The result was a mythological dragon of some kind, and was one of the crowd favorites during the show. 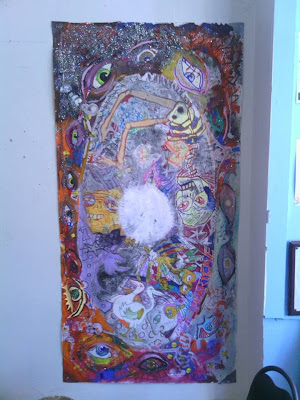 The three oval concept was an idea of medium control. The outer rim would be the first 30 minutes and only consist of paint. The secondary rim would be the last 30 minutes and only contain dry materials. The center would remain white. Just like all the rules during the day, often times people would join in randomly from the street and have no idea what the rules were, and therefore we would have to do some educating and editing of the art. In this case, it was one of the artists who simply forgot the rule, Andrew Coffin, as he painted right through the center. however, it was an easy fix with some gesso and the fuzzt edge ended up being a very good addition to the work. 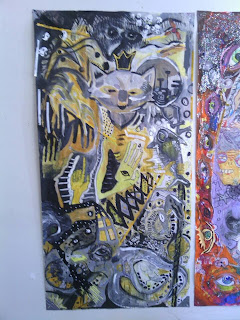 By this time most of the artists were feeling very loopy from all the fumes and the sheer exhaustion of creating so consistently for such a long period of time. We choose a simple rule and watched as a very interesting image developed. There is an element of science fiction and fantasy in this one. Took Gallagher won this painting as the top bidder and wrote a blog entry all about it: http://fraughtwmeaning.blogspot.com/2013/08/3652013-day-215.html 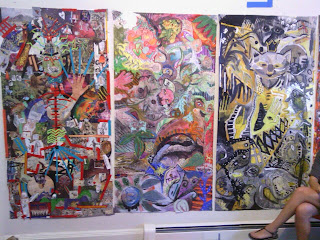 The hour 10 theme was the most confusing. More for the audience than for ourselves. Up to this point there had been live music, drums, singing, yelling and laughter. For this painting we asked for silence and for the subject matter to be plant based. We had a lot of exposure on Channel 8 news and in the art walk newspaper, so we had a lot of foot traffic. At this point it was 4pm in the day and we had our largest audience who were confused by the instant silence, especially when they inquired about what was going on and we answered with hand signals or hand written signs. The best part was when 5pm hit, because it was the end of the silence and also a huge jam session celebrating the start of First Friday! Those who were in the Meg Perry Center at 5pm either had a look of jubilation or a look of terror when the jam session and yelling began. 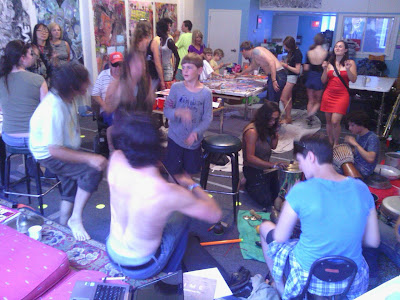 Hour 11's painting was created with collage. Kevin Gallagher and Seth Dussault had brought in stack of collage material, and Art Night's supplies included piles of odd papers and cut outs. Combined with 5 or 6 bottles of glue and a lot of colored tape the creation slowly took form.

Hour 12 was another No Rules painting and shockingly I never took a photo of it. What is even more shocking is that out of all the photos I found on-line seemingly no one took a photo of the 12th painting, and therefore to the internet it currently does not exist.

However, here is a batch of previously unpublished photos of the event. You can find many more on the event page. 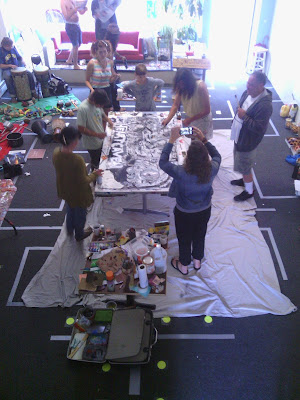 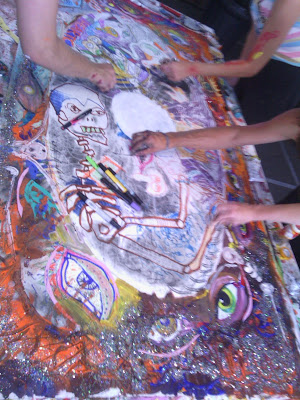 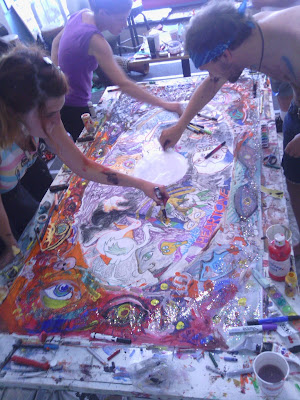 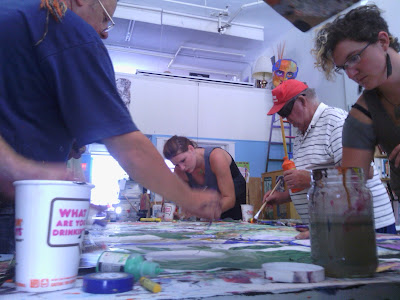 Posted by William Hessian at 5:59 AM