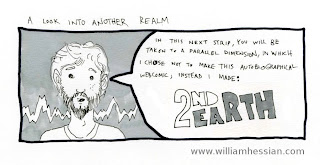 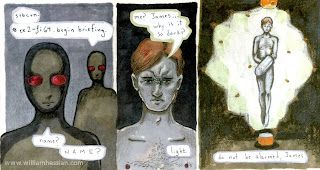 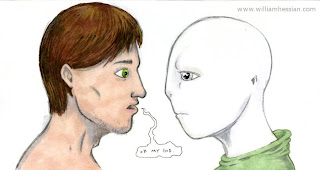 The second earth series, was an idea for a webcomic set on a floating (death star) like structure called 2nd earth. It took place far in the future after our natural earth has been destroyed. The main character wakes up from an advanced cryogenic freeze to be implemented in a suicide bomber mission, his frozen body was sold like many others trapped in cryogenic freeze chambers. The ancient humans waking up from the freeze are far less valued and under developed and treated as slaves. Thus, why they are unfrozen and subjected into a death upon a ship of technologies that do not make sense to the simplistic modern mind of the 21st century human.
These four comics are as far as I am going with the series at the time being. The concept with these webcomics was to have each page have movement, flickering lights, slight animations to make the comic feel a little different than others.

I still plan to write a science fiction graphic novel at some point, and this short series gives me some practice for such a venture later in my life.

Posted by William Hessian at 1:18 PM

Those aliens are coming to Earth to take our Visine. (It gets the red out.)