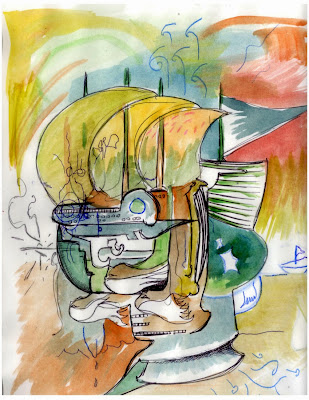 This is a collaborative drawing done with artist Kenny Hodgkins. We drew this image in the community room together while discussing science fiction films like Logan's Run and The Running Man. I was particularly interested in discussing Stephen King's science fiction persona, as the author of Running Man and the similarities/ difference between the book and the movie. Logan's Run story line was also discussed, where a world existed where you were only allowed to live 30 years and then you were hunted down. Personally, I think both movies have a great story line, both came from great books, and both explore a future that is quite grim but seemingly possible. Especially as we look at our own world in 2014, I can see so many scary similarities between the Running Man scenario where the media lies to the public in order to create a good story and innocent heroes are thrust into a deadly game show for the sheeple population to cheer and bet on. I can also see a one world government scenerio where overpopulation is solved by eliminating anyone over the age of 30 and even doing it a nation apart with unmanned drones. Science fiction quickly becomes reality...we are the authors of our own future. What page do we turn?


Each Friday at noon I scan in one new sketch or drawing from one of my many sketchbooks. You can find information about buying artwork, webcomics, performance art, miniature art hunts and new projects on my fine art website William Hessian dot com. Also like me on Facebook, or as projects right here on my Bearded Bunny art blog. If you enjoy these sketches make sure to also see all of the sketchbook friday posts.

Posted by William Hessian at 5:56 AM