Designing a Board Game Class

Last week, I taught a GAME DESIGN class. The goal of the class was to understand:
why do we play games?
what makes games fun?
how can we make our own fun games?
We used matte board for our boards. Mod Podge to make things shiny. Fimo clay to make handmade game pieces. And had a blast. The final day we got to play everyone's game and talk about what we learned about games, and what we liked about games.
Here is some photos of games kids created in my own week Game Class: 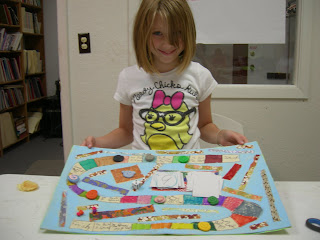 Hannah with her game "Guess that card?" She created an awesome game board with some collage techniques. Hannah made some spiral pieces and a unique game play idea, where the goal is to be able to guess the number on the card each time someone lands on that space. The person who can guess the most cards correctly by the time you get to finish, wins the game. 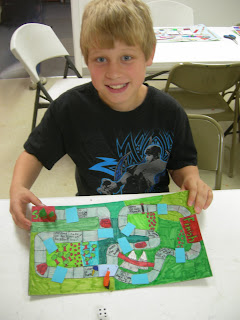 Aaron created "Camping Catastrophe", a game focused around the danger of camping. The first time I played I landed on six "forgot food, go back to start" spaces and hung my head in shame as everyone laughed at me. The game features some secret passage ways, bonus cards and a BEAR! 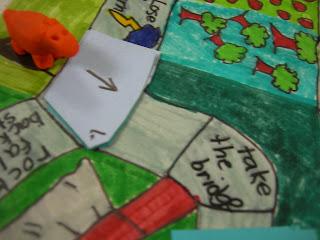 Aaron's bear gets activated and then can attack players and send them back to start. One of the best parts was when he decided to make it a three person game, where one player gets to be the bear and move around the board eating campers. It made for a really fun (and hard) game. 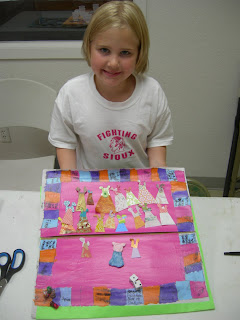 Rachel's 'dressopoly' game. You must collect the most dresses from around the world. Rachel made two games, and this one was a big success. 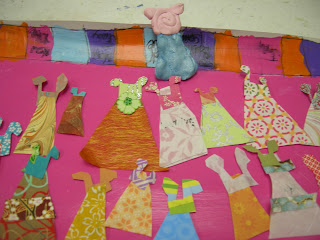 Rachel hand made all of these dresses to be collected as you go around the board. Notice the 3-d trophy dress at the top, which you earn when you get the most dresses at the end of the game. 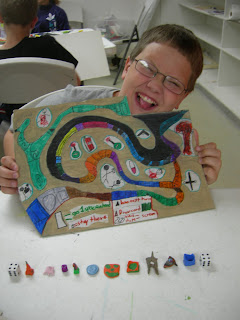 Traven's 'Untitled Game' features a set of really neat handmade tokens and items. The game is unique as you lands on different shapes that make you do different things. My favorite one is the space that you have to scream out loud when you land on it. 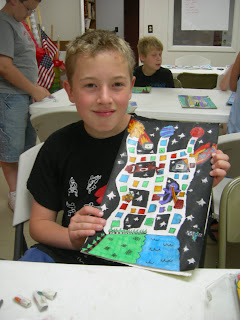 Isaiah's "Random Space" game featured a race to be the first player to collect specimens from earth and return them to your planet. Isaiah worked hard on his game board and the art is amazing. Great creatures, aliens and colors. Everyone wanted to play his game based simply on how the board looked. 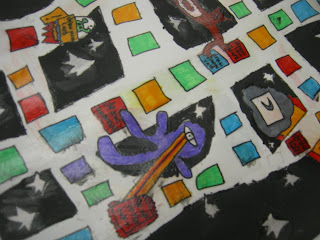 Here is a close up of his board. Isaiah used some creative ideas to fit aliens into the board and make it look dynamic; like the guy shooting a space with his cyclops eye. 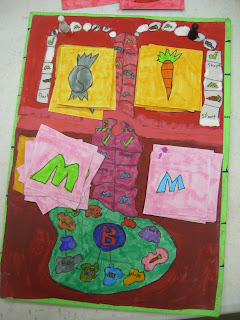 Isaac (not pictured) made a game called "An Inside Job" which is featured on the inside of a mouth. You start on the teeth and fight monsters as you make it to the throat. Then you fight a boss in order to get to the stomach (the green) and then fight the final stomach boss. If you get candy cards it hurts you, if you get carrot cards it is a bonus. Even after you beat the stomach boss, you then you need to find your opponent and go fight them to win the game. The best part of the game is leveling up your character. You get stronger the more guys you fight, and you can buy swords, shields and magic wands from the shop. 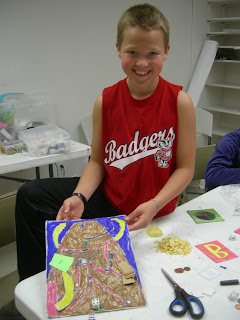 Jonas' "Hot Chocolate" game is a crazy and dangerous adventure as two players race to be the first to get the hot chocolate at the top of the mountain. It is fun racing around the board collecting the bridge and landing on each money space to afford the hot chocolate in the end. 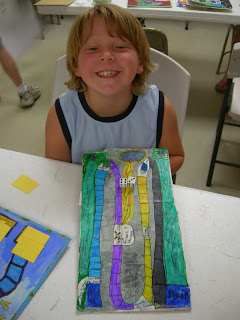 Luca's untitled game, which involves trying to race to safety from lighting storms and downpours of rain. The last spot before the finish sends you all the way back to start, so you better roll exactsies. 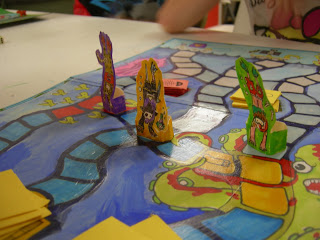 Here is my game, 'Treasure Divers'. Cat vs pirate vs ice cream man in an underwater battle for treasure. 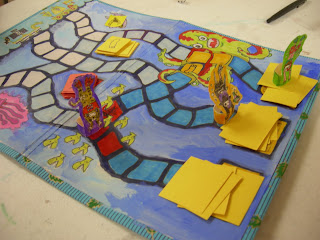 The board, complete with evil octopus, swarms of deadly piranhas and a blood seeking shark.
Posted by William Hessian at 3:53 PM

That's all I can say.

You inspired these kids! Awesome!

These kids did great! I teach a gamedesign class to kids too, we sue thegamecrafter.com to print them on real game boards the kids and parents thought it was impressive. But your classes games being hand made look awesome and unique. I might have ours do it that way sometime!

never heard of game crafters until now. Neat website. I have to say, teaching kids to design games, teaches them about fun, balance, probability, fair play, mathematics, principles of art and design and so much more! I suggest it to everyone!