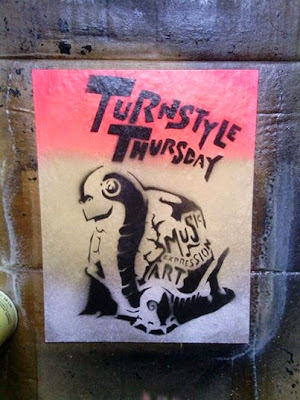 Turnstyle Thursday is Portland, Maine's most accessible open mic currently located at CTN 5 community television. Turnstyle is hosted and produced by the Hidden Ladder Collective. Live collaborative paintings happen during the 3 hour event each week and everyone is invited to perform, play, dance, read, cheer, draw, paint, yell, laugh, or recite artwork. Hidden Ladder Collective won producer of the year in 2013 for Turnstyle Thursday and the open mic was nominated as one of the top 5 open mics in Portland Maine!

Being an active member (and founding member) of the Hidden Ladder Collective and one of the original organizers of Turnstyle Thursday and the collaborative art wall I wanted to create something for the fundraiser table, which helps us raise money to pay for the CTN recording studio each week. Thurman the Turtle was my mascot creation for the poster and I used three stencils and 4 different spray paints to create these posters. They are limited to only 20 and are on sale for a discounted rate of $5 available at CTN (you can also message me to buy one online). 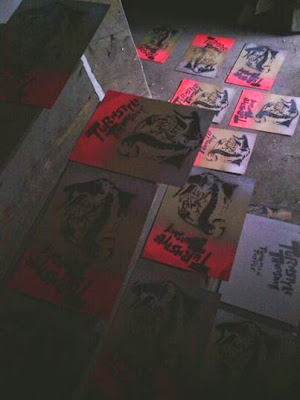 Posted by William Hessian at 6:09 AM