Masked Hornets and other OdDitiEs

A ton of photos from a bunch of photographers have been compiled in a nice facebook gallery at: Masked Hornets and Other OdDitIEs Here is a sample: 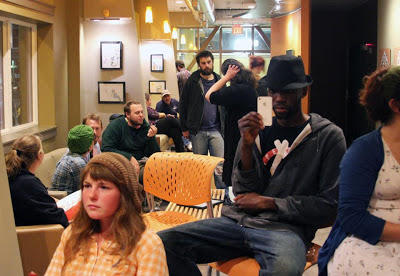 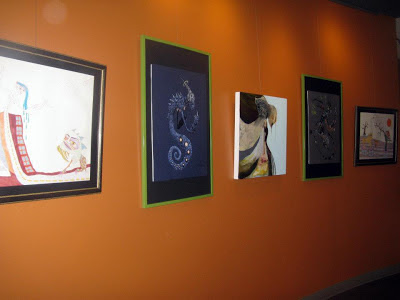 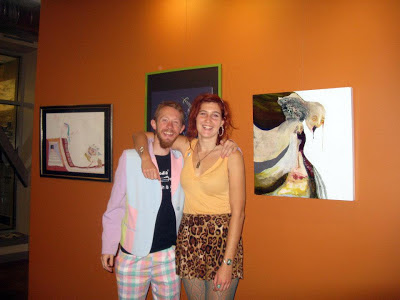 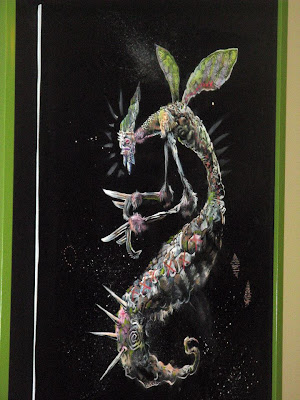 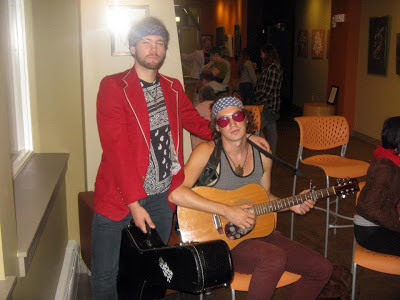 William Hessian and Abbeth Russell team up for a bizarre art show of creepy creatures and crazy characters that deals with foreclosures, freedom and loneliness.

For Portland, Maine's "First Friday Art Walk" dozens of paintings, ink drawings, and mixed media drawings will be on display. William Hessian, also known as the Canvas Killer, is a travelling artist from Minneapolis who is known for his public miniature art hunts all across the country, and for performances in which he destroys his own art. Abbeth Russell is a local artist and juggler, who has recently graduated from MECA and is known for her magical and surreal paintings. On Friday night the artists will be accompanied by two excellent musical performances by Monica Cooper and by SighLess.

Recently, William Hessian has been active in Occupy Portland, by organizing events focusing on Foreclosure. William has recently discussed the Foreclosure Forums in the Daily Sun (September 8th, 2012) and on channel 13 news (August 14th, 2012). Many of Hessian's new artworks featuring Masked Hornets depict insects who have armed themselves with masks, armor and weapons to protect themselves from the world around them. The insects are always in flight, searching and fighting for a place to settle, but finding no where to land. The Masked Hornet series is a commentary on the housing crisis facing many people around the globe who have to struggle and battle just to find a place to stay.

"Each hornet in my paintings represent someone who I have met, a friend, a co-workers, a family member. I choose people who are struggling to stay free and I transform them into insects. Often times these individuals are hiding behind masks, and have a lot of layers between their daily interactions and their true emotions. After being evicted twice from rental properties in Minneapolis, I have become very involved in the foreclosure crisis and I have felt and watched how devastating it can be for people when they are left in limbo without a place to live. My artwork tells these stories in a mythological setting while my organizing work is trying to find the solutions to these problems." William Hessian, discussing his work in the Masked Hornets and other Oddities Show (Sept 25th, 2012)

Abbeth Russell is a recent grad from MECA (maine college of art) and has a strong following in the art community in Portland Maine. Abbeth is also a street performer and can often be found juggling and selling art on the streets of Portland. Abbeth's work has a deep emotional, yet whimsical, quality that draws you into the unfolding stories taking place in front of you. Often times the characters look pained or tormented, but there is a joy and freedom inherent in the scenes. Abbeth also creates zines and smaller drawings which will be on display and for sale during the opening.

Both, William Hessian and Abbeth Russell host a weekly Sunday Art Night in the East Side of Portland where artists gather to create work, do workshops and have discussions. Many artists, musicians and poets from all around the Portland area attend the weekly art night and collaborate on really relevant and important work. Just 24 hours after the event page has been up already 24 people are going and maybe more have been invited. Many skinny 17 inch posters are going up all around town to advertise for the event. While this art show may be a few steps off of Congress Street, the Avesta Oak Street Lofts is going to be the place to be this First Friday.

The two musical performances are worth seeing on their own. Monica Cooper is a local musician who you might may have heard perform with Boxes and Paper Tales. She has recorded and performed all over the Portland greater area with both bands over the last two years. Monica Cooper has an incredible voice and her solo act includes original songs and she covers of an assortment of popular music. The musician you may have never heard is SighLESS. You may have seen SighLESS around town playing songs and juggling, but this is his first indoors performance. SighLESS has an entire set of original music, with passionate vocals and an intense message for everyone to hear.

Posted by William Hessian at 6:52 PM

I could choose to fit the canvas print that I was ordering from wahooart.com to the pattern and color of the wallpaper in my living room. I could search for artwork by subject matter and even predominant colors. Then I customized the frame online because the site allowed me to match the frame style with different wallpapers, one of which looked like ours.
So now have this canvas print by Pierre Bonnard, http://en.wahooart.com/A55A04/w.nsf/OPRA/BRUE-8LT4PD