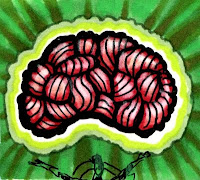 Ah, the brain warriors. This blog post is an ode to an idea I thought was very brilliant for about a week and then decided it was too much work for very little gain. In fact, the more I study the pages and pages of notes I scribbled down I think it was an idea that was never going to blossom no matter how I approached it. The brain project joins the long list of other monumental concepts for art projects that never end up taking place. Instead of just letting this project die in the stack of sketches books and note paper, I want to give it some justice and spell out this ellobrate failure of an idea.

I do also want to mention that this idea binges I go on do sometimes turn out to be great ideas, like Canvas Kill Live, Future Products or my Miniature Art Hunts. 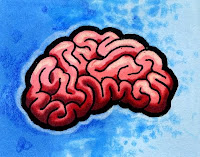 Back to the brains. Here is the concept of the idea in its last stage before I decided it was a waste of time. The concept was to take 1 inch versions of these brains and attach them to hand drawn miniature artwork. Then carry a load of these whereever i go and attach them all over the place, much like my miniature art hunt, only less designed as a hunt and more designed for random people to find.

If the finder decided to take this brain from the wall, post, hidden location then the back of this little image would give you a website link. This link would be a very unassuming website directing you to peel your brain from the backing. It would look something like this: 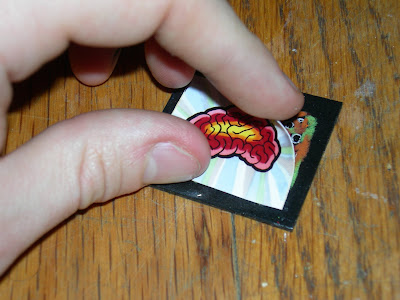 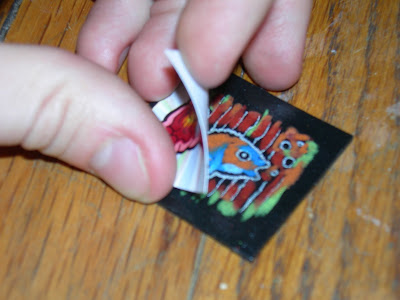 Under each brain would be an original drawing an animal. The person who revealed this animal and held this artwork would be called a member of the fish warriors, cat warriors, octopus warriors etc. 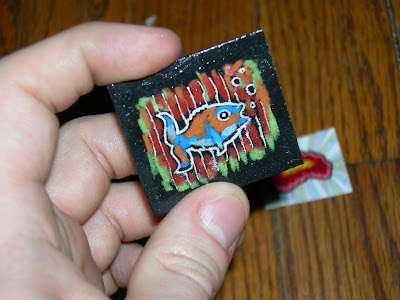 Here is the fish warrior badge.

The fish warrior would then be asked to send me an email with confirmation of their warrior status. In response they would receive a special link to the Fish Warrior page explaining that they have been chosen as a Fish Warrior, if they wish to turn down the duties of the fish warrior they may either re-hide their art badge, or pass on their badge to someone who might want to fulfill the position. Each faction of warrior would come with a series of tests and levels. Each would be a task that fit under an umbrella of themes. The creator, the communicator, the collaborator, the keeper of secrets... these are not fully defined yet. The tasks start very small but gradually progress to harder and more challenging tasks. Once you confirm the completion of each task you graduate, or level up to new tasks, as unlocked by me with new urls. Tasks would include things like:

Create artwork and hang it up in a public space

Contact three artists (musician, filmmaker, artist, actor etc) you do not know and tell them what you think of their work

Write a press release to a newspaper talking about yourself and accomplishes you've made. 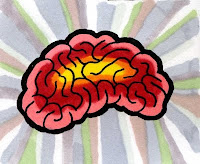 The idea was to have one faction of warriors take on the role of hiding new brains, and then communicating with new warriors. In my notes it would work like a psuedo pyramid scheme where motivated people would continue the cycle I set up to try to get as many animal warrior doing create things all over the place. One animal warrior would hopefully breed two more. And so on and so on. 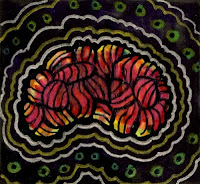 In a side note, I thought it might make more sense for the person to declare their animal based on what made the most sense to them, but then I figured people would not be challenged enough and fall into their comfort zones with this option. As you can see I even started designing the brains and even came up with a few trial versions of these art badges. The whole thing was going to be a big secret, with hidden urls and a secret e-mail address. A very odd archaic website system and then invite people to send in photos of themselves performing these tasks. I wanted to let the warrior make it as big and grand as they wanted.

The ultimate level of each warrior would then allow them to do one of two things:

1. Ringmaster/King: take over one part of the entire process

2. Transcend: Get a new badge and start over. Giving people the option to be mailed a new warrior class and start at the beginning all over again. This way a really devoted person could achieve the top level of all warrior classes if they wished. Although doing so based on my tasks would have been very hard and lead people on some crazy odd adventures.

After pages and pages of notes, award systems, task orders, and trying to figure out how to implement new ideas as the project progresses; the undertaking was overwhelming and I really became worried that not enough people would find this thing, seek it out, and follow a random e-mail. I dreamt really big, but just did not feel the idea was based in enough reality, especially considering only a small percentage of people would have the time or interest in playing along, and even those people would have a hard time taking time out of their busy lives to truly get involved.

That is the story of the Brain Warrior project that never happened. However, if you like this idea you really should check out my Art as Treasure miniature art hunts. I can also tell you that I have some less intensive interactive art project like this floating around the world. Make sure to visit my projects page and see other really crazy ideas which I hope to raise enough money to accomplish.
Posted by William Hessian at 6:36 PM

Wow. My head is swimming. That idea is just so super cool but I can see why you needed to let it go. But it is really cool to imagine that people would follow through that much!

And I swear I am going to SOMEday figure out a way to get one of your Art Hunts here in Michigan. This must happen.

part of the problem, was it was becomming too much like Fight Club. and who am i to tell people what to do. which is why i wanted to change it to open ended tasks and have the people involved craft the experience.

the art hunt must happen i agree. if i can get down to one card load when i move back right before summer maybe i can do an art hunt as i head back to minnesota. it would be great to perform a few along the way! Took's backyard is top on the list for an art hunt.

What a crazy but fun idea!

Was a cool idea.

I'd say the craziest was the project where you did the awake-four-hours-sleep-one-hour deal. If I recall, it didn't last very long, but I'm glad you approached it with sense and research.