The Zombies Vs Robot drawing is finally finished. I finally got back to working on this image to have it done and framed in time for Steven's Square Art Centers' Zombie Carnival exhibition. The artwork pictured below was created with ink, pencil, water color and prismacolor pencils. You can see this drawing when it was half done, and also the pencil version which started about 15 months ago. By the way, the artwork in frame is on sale for $300, contact me if interested.

I never got into Zombie movies much as a child, although the concept was something that interested me. In the last few years, Adam Hafermann, a close childhood friend and artist had gotten me to watch some of his favorite classic zombie movies. While many of the movies lacked a lot of common sense in my opinion, I did find the theme very intriguing.

On my own, I stumbled upon a concept which you can find in some of my previous art: Robots Vs Beasts. The concept is based on our choice as human beings of which way to go with our current existence. I feel we have only two real choices, and that is to become animals who live off the land, like indians or cave men (minus the lack of intelligence) and live free from exploiting the world and globalization; or else embrace our technology and use it to make ourselves immortal, which is probably only possible by becoming robots (or transferring our knowledge to them.) Those that choose neither beast or robot, will undoubtedly - and probably already have become.....zombies.

That is how the concept of this drawing came about. Here is my artist statement that accompanies the work on the gallery wall:

When humans have long merged into thoughtless zombies, only our cold robotic creations can stop ourselves from eating each other to death and ridding the world of what the human race has become. Cities will become vending machines for brain hungry moaning masses of flesh, while the robots we built will try to use our designed intelligence to systematically destroy the zombie nation. Humans have already lost, but who will prevail on this planet, Zombies or Robots? 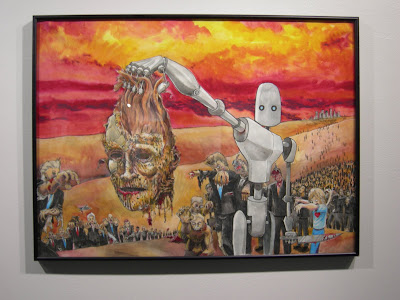 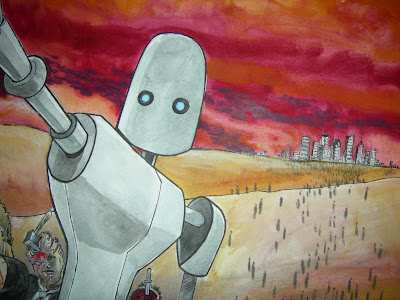 a close up view 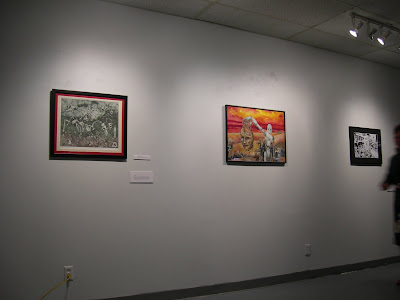 on the walls at Steven's Square Art Center 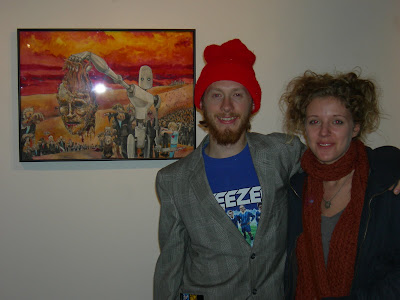 william hessian (me) and kelsey ericson at the opening
Posted by William Hessian at 11:16 PM

That is an awesome painting! A mix of "I Robot" and "Zombieland"!