The Republican National Convention (RNC) is here in St. Paul this week, and I plan to visit to hold up my new creation, the McBush monster. Featuring the two headed Republican beast, George W Bushs face with horns and John McCain with baby horns as well. The large claws represent the evil that Republicans stand for, with their patriot act, war policies and corporation greed. I protest their terrible decisions. 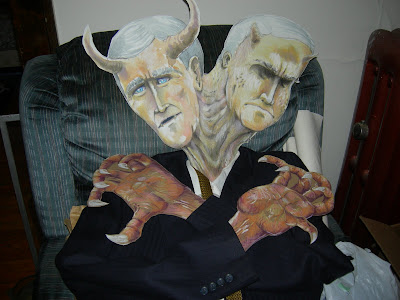 The entire creation is not functional yet, but will have wire to support the arms and a wooden stake holding it all together from behind. I hope to have pictures of the McBush creation walking the streets of St. Paul in the crowds of Republicans. 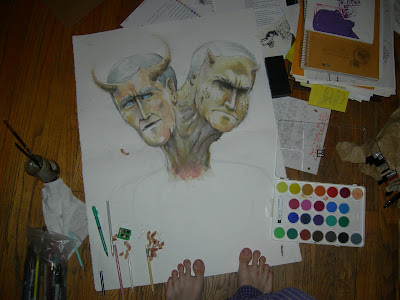 I do not support our current administration, and strongly oppose McCains campaign. I am not a Democrat, although I am voting for Barack Obama in the coming election. I really hope Barack wins, because it will be a sad day in America if McCain takes office.
Posted by William Hessian at 9:03 PM

By the way that's an awesome blue chair!