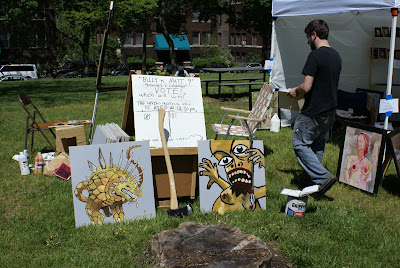 The Red Hot Arts Festival featured Matt Semke and myself in an art battle (our 8th Billy VS Matt art battle to date). Over 80 artists attended this art event in Minneapolis.

Hundreds of people watched as one of us painted a cave man and the other painted a dinosaur. Without seeing each others works, we presented them to the crowd to vote which of the two paintings would win in a fight....the losing painting was chopped up by the winning artist using an axe.

The best part of the entire festival was in the very middle when the band BFF (best friends forever) was playing, and I had won the current round of Cave Man Vs Dinosaur, I walked around the park with the axe perched on my shoulder very menacingly (at least as menacing as I can get) and upon returning to the axing stump absolutely destroying Matt's poor cave man. Meanwhile, literally ten feet behind me a huge crowd was dancing out of control to BFF's awesome music. Most of them had no idea the chopping was even taking place.

There were a total of 11 rounds in which cave men battled dinosuars. We are working on a video of the event. Click here to see last years monster axe battle! To see the list of artists that attended this years' Red Hot Arts Festival click here.

Next weekend (June 6-8th) at the Center for Independant Artists will feature Billy Vs Matt 9: TEN FOOT PAINT BRUSHES. Come check it out.

Check out the Red Hot Art photos below: 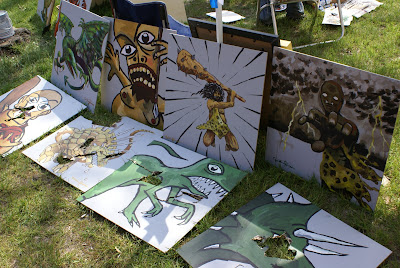 Here are a few of the cave man vs dinosaur battles. Winners are on the top, the losers are lying down with axe damage. 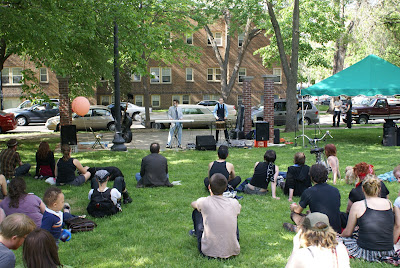 This is one of two music stages set up. This band was a punk version of buddy holly. I do not know their names, but they were rockin. 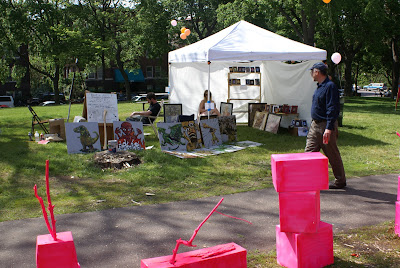 Here is a good view of our set up. Easels face to face on the left, behind the voting board and axe. Our tent and display artwork to the right. Don't ask about the pink things, I have no idea what they were, other than visually appealing. 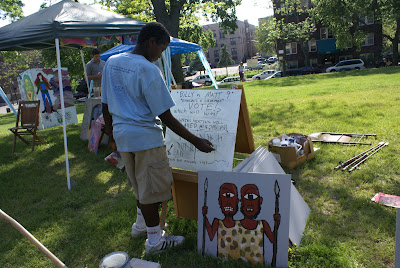 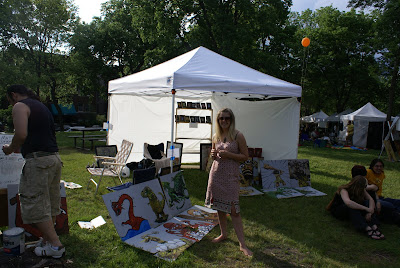 Lastly, here is my girlfriend Kelsey contemplating her vote and standing in front of all the past battles.
Posted by William Hessian at 3:49 PM