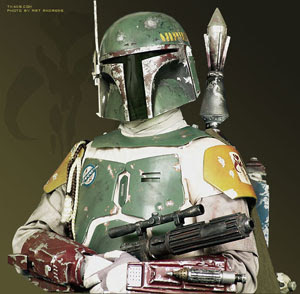 I wish I could say that sentence honestly. "I created Boba Fett. George Lucas told me to come up with a killer bounty hunter costume design, create a back story and submit it to him by friday for his Star Wars movies. I went to work drawing Mandalorian armor, wookie scalps, and the coolest helmet ever. I called him Boba Fett."

A man can dream. If only I could have said that. Sadly, I was not even born when the creator of Boba Fett was drawing up the coolest character design ever. I remember as a little boy playing with the boba fett star wars action figure, he was still kicking the smelly plastic out of the larger ninja turtle toys and the much larger He-man toys deep into the 80s on my bedroom floor.

Still to this day, whenever I wear a mask at halloween, or a ski mask in winter a small part of me feels like a little kid, and an even bigger part of me feel like the badass bounty hunter Boba Fett. The sarlacc pit did not kill him by the way...read the books....he's still alive!

To honor my (and pretty much everyone's) favorite character I have made a Boba Fett bearded bunny, I also did Jango Fett, you'll have to find the Jengo bunny at my shop. 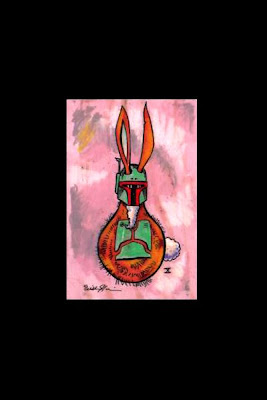 I sell all my bearded bunnies in a frame for 5 dollars. They are all limited (runs of 10 or 15), and hand signed prints. However, Boba Fett is almost sold out, I only have two left.

Meanwhile, for those that just cannot get enough Boba Fett I hope you have already seen the female costume version..... because 'wow'. I am trying to talk my girlfriend into letting me airbrush her as Boba Fett, and she has half agreed. I need an athentic mask though. I did convince her to rename our cockatiels Boba and Jenga (the 'a' is for the female), which is a good start. 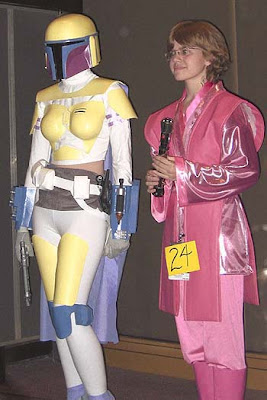 See my 48 different Bearded Bunnies that are avaiable for sale.

Also make sure to read about my miniature artwork hunts, and watch my brand new This is ICELAND video!
Posted by William Hessian at 2:12 PM