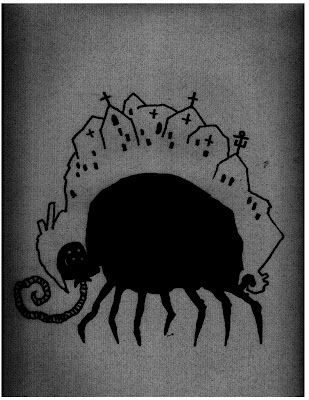 I once played Golden Axe the arcade game with my brother and my dad. Once of the levels, which we never got to, you were fighting as a Barbarian, Elf and Wizard on the back of a floating turtle. The moment I saw that I instantly became obsessed with the concept of creatures so large that you could live on them. Insects, bacteria and colonization have since been fascinations of mine. Similarly, Street Fighter and the incredibly graphics with international stages, really began my fascination with other parts of the world, even as inaccurate and fictitous as they were. My sketches above is just a simple marker sketch re-exploring the idea of a giant creature which is the home to many smaller creatures.

Posted by William Hessian at 4:33 AM