Board Game Hour @BoardGameHour William Hessian from Hidden Ladder Games and I am the inventor of PBL ROBOTS card & dice game. I have been playing games and designing games since I was a little kid. Win conditions in tabletop games is something I have traditional been interested in ever since I was old enough to know that I WANT TO WIN! Of course, many tantrums would follow this realization, but eventually (at an older age than I want to admit) I settled into a place where I was more interested in experimenting with the win conditions of games in order to test out different options. During these tests and the subsequent playtesting for my own games there have been three areas which I find the most fascinating about win conditions in table top games:
is doing their weekly theme on win conditions and it sparked a series of thoughts that I wanted to share and questions I wanted to ask. First of all, my name is

Win Condition Variety
Settlers of Catan is my favorite table top game ever. However, it is one of the games in which I have altered the win condition with friends the most often. In fact, I think the race to 10 victory points in Catan is one of my least favorite elements in the game. I often tell my Catan playing friends to try playing the game where the end of the game happens when the last Development Card is drawn, or playing a certain set of rounds (essentially a time limit). Many people do play Catan with house rules or win condition varieties that changes the end of the game just slightly. Because the game itself is so incredibly balanced, nearly all the win condition varieties are fun. A well made game should adapt to alternate win conditions.

Monopoly is a game that traditionally ends painfully since the win conditions are in place near the half way point in the game. Rarely is a game of Monopoly a close race all the way to the end. Seeing this pattern people either hate the game itself or quit once the writing is on the wall. I strongly encourage anyone playing monopoly to play to a preset time limit and then just count up your assets. The game becomes much more enjoyable, and takes far less time to play. Monopoly also has a series of great win conditions variants online that you can try, that eliminate the most frustrating parts of the game.

I get a kick out of games with unusual win conditions, although often find them to be a novelty. Although I always appreciate games that encourage their players to experiment or try variant win conditions with their own games. What are the weirdest win conditions you have seen in a game? What new win conditions rules have you made up for games you play? Did they work, or did they fail?

Dramatic Finishes without undermining the skill
Everyone loves dramatic come from behind finishes, when a game hangs on the balance of one final moment: one flip of the cards or roll of the dice that determines the winner. However, if this moment comes at the expense of all of your hard work and strategy during the game, it can be very frustrating. It can leave a player wondering: why not just play high card and save ourselves the time. I was famous for my epic SORRY tantrums, when the sheer luck of the game would drive me into a rage as a child- I just could not handle the fact that zero skill was needed and that the game basically plays itself.

It is the classic struggle between designing a game that has the right balance of luck Vs skill. That moment when a crowd of people burst into cheer when that fate is determined is a very satisfactory outcome of good game design. I often use the metaphor of the end of basketball game, which can at times be so exciting with a BUZZER BEATING FINAL SHOT, or in contrast result in 45 minutes of boring free throw shooting without any payoff. The goal for any game is to steer towards that dramatic finish, which means that all players should have a road to victory near the end, even if it is an extreme long shot. I always think good win condition design is evident immediately after a game is over when the losing players dissect the ways in which things could have changed for them to win, and animatedly reminisce about how close they came. Can you think of very many tabletop games that have dramatic finishes? What games are they and what is the best dramatic finish you have played?

Flavorful Win Conditions
Milling another player in Magic the Gathering with a goofy combination of weak spells is a great way to kill some time with flavorful fun win conditions. MTG is the epitome of flavorful win conditions, whether it is smashing someone with brute powered monsters, burning them with spells or flying over the top with an army of angels, the game knows how to give its players satisfying finishes. 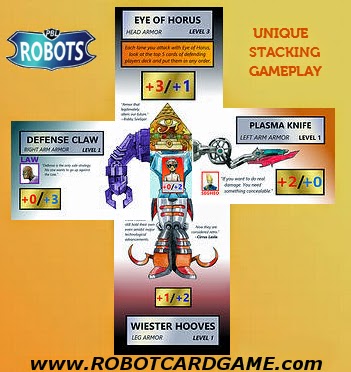 I have played many games where the ending of the game is lackluster or just a mundane action that happens to be the final move and result in unflavorful victories. The game just fizzles towards the end. I often think that a win condition, the way in which you win the game, should be a great story to tell your friends even if they do not know the game (although, do not try this at home). Good games seem to always offer a player many resources that can be correctly assembled to form ultimate win conditions or roads to victory. Good games are designed to funnel a player towards these really intentional flavorful win conditions, and even if you lose the game you want to play again in an attempt to successfully perform that victory. Flavorful win conditions are one of the keys to replay-ability. What is the most flavorful satisfying victory you have had, or almost had?

All of these win conditions concepts have been considered and developed in PBL ROBOTS pictured above, which you are welcome to check out at PBL ROBOTS.
Posted by William Hessian at 4:25 AM