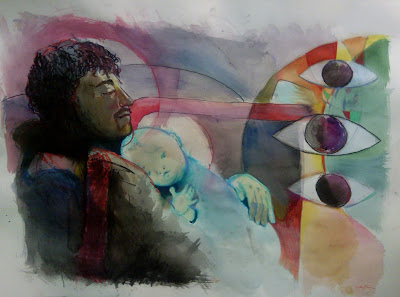 For Father's Day this year I received a commission from a good friend. Courtney asked me to paint a Father's Day Gift featuring a portrait of her husband, and my good friend Matt (and fellow Midwestern artist. See his work at: www.catswilleatyou.com) and their new creation: Arlo. I was thrilled with the project since back in college I painted my friend Matt multiple times (probably nearly 20) and I was honored to now be including their new child Arlo. Above is the final mixed media peice that I mailed to them, and below is a series of studies that will offer insight into the progression I take from idea to finished work. 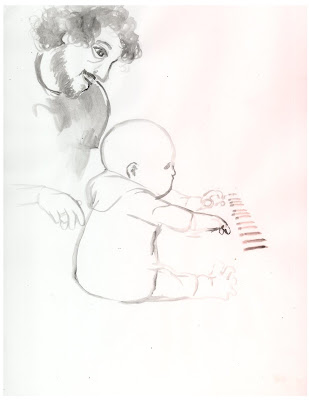 I was given a series of photos to work from selected by Courtney. I chose my favorites and did a series of ink studies. The above one was a fun exploration of space and composition, and included the element of music which is an important thing in Matt & Courtney's world. This sketch also hearkened back to subject matter of the baby, which was the subject of a majority of my work in college while painting on an easel right next to Matt. On the wall of Matt & Courtney's home they have one of my largest "baby paintings" hanging up on their wall. 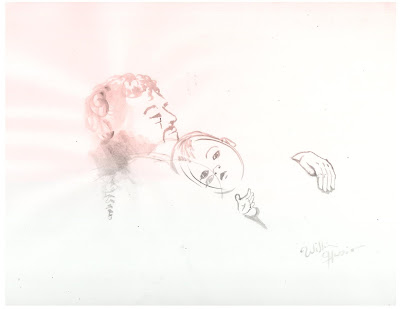 The most touching photograph in the set was a simple shot of Matt and Arlo on a couch. Arlo is staring at his own hand, seemingly bewildered by it. He may have been starring at Courtney who was taking the photo also. A narrative occurred to me immediately upon seeing the photograph. Arlo, staring at his own hands, being the offspring of two extremely talented and artistic parents, was to me referencing his own bright future and future talents to soon be crafted. This was compelling to me on a variety of levels. I decided to attempt a few more studies. 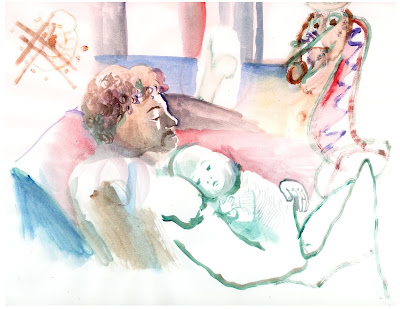 The watercolor study shown above was a collaboration done with Kenny in Portland, Maine. Kenny collaborates with me often and our styles challenge us to think up new solutions to old problems. His additions, particularly the dragon on the right hand side, to my composition study inspired the colorful section in the final piece. To me, it added to the narrative as it represented Matt Semke's ongoing artist's mind which is always creating new images and ideas, while holding his greatest creation. 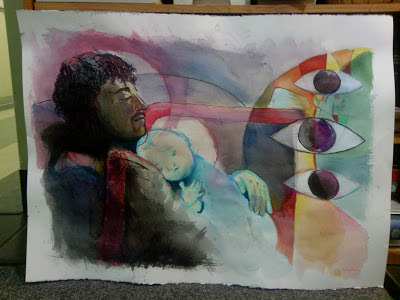 The final work was a marker drawing, with watercolors, and colored pencils layered on top. Happy Father's Day to a great family.
Posted by William Hessian at 4:41 AM