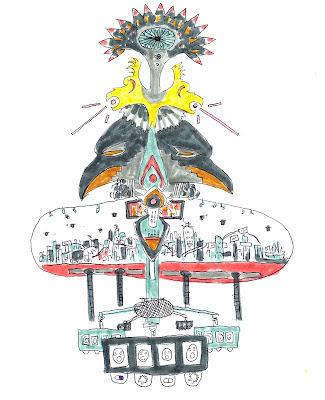 Once in a while, when I am teaching a group of kids, they will begin to draw things that I think are a little inappropriate or in bad taste. Having been one of the kids that drew inappropriate things as a child myself, I know that anything someone told me NOT to draw is what I wanted to draw. Therefore, my strategy as a teacher is to instead sit down next to the kids and draw something that changes what they are interested in drawing. For instance, the kids drawing body soldiers being shot up by machines say my quick sketch (shown above) and decided to start drawing pictures of spaceships and cities floating in space. I told them this elaborate story of how anyone who broke the law in this space city was sent to video game jail. The prisoners were forced to play a video game, which they didnt realize was actually flying police drones around the city arresting other people. So prisoners were arresting more prisoners and forcing each other into a slave system. The one who play the game the best get to help fly the entire city through space and whenever the spaceship meets an enemy ship they can let the prisoner controlled drones out and let the 24 hour a day video game players shoot up other ships with ease. In the end, I wondered if my own sketch was just another one of those drawings that someone else was supposed to tell me not to draw, especially around kids. Eh, either way....the kids loved it! Each Friday at noon I scan in one new sketch or drawing from one of my many sketchbooks. Many times my sketches are ideas for larger projects that you might find on my fine art website William Hessian dot com, or as projects right here on my Bearded Bunny art blog. If you enjoy these sketches make sure to also see my Favorite 20 sketches from 2011 or go back and check out all of the sketchbook friday posts.

If you want to own some of my work, you can always find great deals on my artwork and stickers at my Etsy shop. Do not forget to subscribe to my blog and never miss another post.
Posted by William Hessian at 2:25 AM