A written recap of Billy Vs Matt 13: Two Box Battle

Whistles blew. Sirens blared. The box didn't move. Heat stroke. The Red Hot art festival got too hot for the Two Box Battle. 95 degrees outside, heat index was 115, meant at least 115 degrees inside the boxes, and 150 heat index. And yet, the battle would go on: 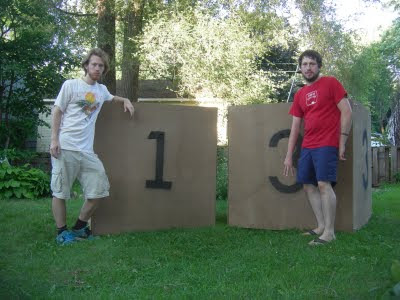 On July 30th, at 10:30am Matt Semke and myself(William Hessian) trapped ourselves in tiny boxes and painted. On Saturday, we painted for over nearly 9 hours in the scalding heat, and we didn't get out once. We created 32 paintings; one painting every 15 minutes and then lifted our heavy boxes and moved to a new spot leaving the artwork behind. The first few people to peek in my box exclaimed, "wow, he's really sweaty". I must have sweated out a few gallons of water. Sweat kept falling on my painting making the surface hard to paint on. It was a constant struggle to keep my sweaty head out of the path of my paintings. The first few hours I was loving the sweat lodge box. I was having fun peering at people without them knowing, or surprising people when they saw my eyes staring out at them. Even peeing in the gallon jug was kinda fun at first. However, the sun was beating down on the box, and there was no where for the heat to go. This was a problem. People could feel the heat billowing out of my box when they looked in the eye holes. At one point I was so hot I had to start cutting off my hair. I did not have enough time to cut it off in one sitting since I needed to paint my pictures, so I had to snip a little off each time I moved the box. At 4pm, the box was so hot and humid, that I fell limp to the bottom of my box gasping at the gap under my box trying to breath in fresh air. Hot air that felt cool. My only object was to gasp in some fresh air. Fresh air. I realized I had no idea how time had passed. My big gasps and the heat made me light headed. Confused. I did not know which way my box was facing, or where the box was. A headache was swelling at the top of my nose. I painted on the side of the wall, "Heat is an illusion" but later added, "...maybe not".

With a few hours left, I was painting really bizarre and exciting things. My camera had died to the humidity (not the first time/ piece of junk) and therefore everything I was making during this vision quest of an art battle was being created, pooped out of the box, and then gone forever. I would love to see those paintings again, and in the light; because they were paintings unlike anything I have made before. People were picking up the art and then donating cash in through the eye holes of the box. If you picked up one my works, please take a picture and send it to me (william.hessian@gmail.com), I will post it here and give you credit.

When the last painting was dropped I agonizingly rolled out from my box and collapsed next to it. Feeling terrible. Matt did similar. My back was killing me. My headache was painful. I had a headache until 2am that night, and could barely sleep because of my lower back issues which stemmed from awkwardly lifting the box. Fred Flintstoning these boxes all around the art fair was much more physically demanding that I had considered. If was like doing squats with 100 pounds on your back all day long while inside a sauna. Semke's upper back was injured. I knew, despite the agony of day 1, that I was committed to a full Day 2. Semke and myself have a saying; if one of us dies during the art battle, the other one will become famous by association. It would also be ironic if these wooden boxes became one of our coffins. However, when I groaned getting into the box on Sunday, Day 2 of the box battle, the thought of the box being a coffin was a little too realistic for me. So I painted:

"This box is the opposite of a coffin, inside this box life is accentuated"

on the back of one of my 15-minute masterpieces. I also wrote, "I collect art that is pooped out a box" on the back of another. Then I painted a yellow circle around the two eye hole I was peering out of. I was desperately trying to lighten my mood. Our neighbors at the Red Hot art festival during day 2 were giving us lots of water and drinks fearing for our safety. I think this was a response to how terrible I looked and sounded after Day 1. We also started getting people requesting certain subject matter for our paintings, and this was both fun but challenging. Making an impromptu improve painting in 15 minutes, and making it good, was very difficult. Especially when the horde of children began taking an interest in peeking into our boxes. I was just trying to make art, and the 15 minute time limit meant that I did not have time to entertain. I'm glad one of our rules was to remain silent. Because I was not interested in answering a million questions.

When the final whistle blew Sunday Night it felt as though I had run a marathon with a box on my back. The boxes were tipped, as illustrated by Semke's free at last illustration. And we had survived the TWO BOX BATTLE. All we had left is empty boxes with piles of cash and jugs of pee.

The donations were added up to see who won the battle, and then half the money was donated to a local charity, People Helping People. Matt Semke won, by less than $20 dollars. 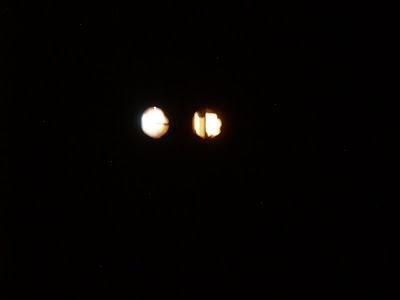 Posted by William Hessian at 3:56 PM

You and Matt took the Red Hot Festival too literally!