Never take down that mural!

An artists' response to Governor LePage's announcement to remove Judy Taylor's mural from the Department of Labor in Augusta, Maine. 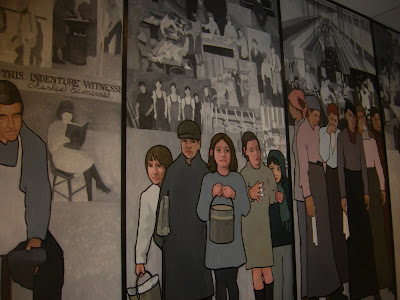 Governor LePage is the worst thing about Maine, hands down. This is not a political blog, I try to keep my politics on Zombie Robot Frosting. However, sometimes Art and Politics mix so tightly that one is not distinguished from the other, and those times are almost always to most exciting times in my life. Right now is one of those times.

Governor LePage is having a mural removed from the lobby of the Department of Labor, It was created by Seal Cove artist Judy Taylor in 2008 as "a commission of a lifetime", for the Maine Department of Labor. Basically he said that the painting was too 'working class' and was not 'pro business' enough. Therefore needed to be removed. Apparently he has not even seen the painting himself.

The response has been outrage. I huge group of citizens gathered Monday at noon in front of the mural to protest this attempt to re-write history and silence the power of the arts to tell the truth (their talk is of replacing the mural with something neutral...mountains, etc.) Amazing artists Rob Shetterly, Natasha Mayers and others voiced their outrage at this growing corporatization of our government! 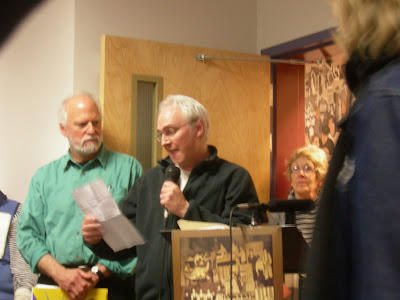 The actual room containing the mural is quite small, and the speeches had to be given in the hallways. The hallways were filled with hundreds of people from one end of the building to the other. Chants rang out, applause, and yelling. 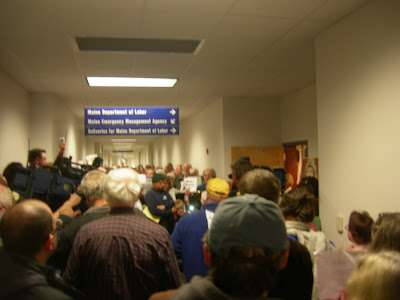 Being new to Maine, and not having a lot of knowledge about the politics in Maine I knew I wanted to go protest but I was not sure what I wanted to contribute. The night before the event, I was speaking with friends and the idea popped into my head to make stickers of the mural. If LePage wants to take it down, then we should put up millions of them. A few hours later I was printing and cutting 300 stickers of Judy Taylors' mural to hand out to those in attendance. The idea is that the painting means much more that just a painting. It is a history of the working class in Maine. The working class all around the world is what society is build on, they are the most important class, and sadly the working class is also the most disrespected and taken advantage of. The battles that we win, child labor, sweatshop, gender inequalities are shown in this painting. It is important for residents of Maine, it is important for residents of America and it is important for the residents of planet earth. We can let anyone kick us while we are down, and that is exactly what LePage is doing, and has been doing since taking office. 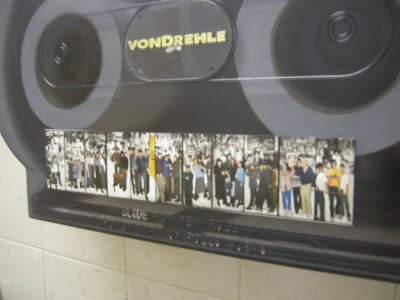 Here is one of the stickers posted in a McDonalds bathroom. I hope the stickers go up all over Maine so that we can be reminded that we need to ban together and resist the ways in which we are exploited for the good of others. As an artist, it is especially frustrating to see careless treatment of important art. This attempt to hide, deface, or cover the power that Judy Taylor's painting is meant to represent by removing it is a cowardly act called for by LePage. However, if our response is correct we can elevate the work to a new audience, and give the work its chance to shine. Because the working class is the backbone of the civilized world, more art should be done capturing and idolizing these nameless and countless workers.

Never take down that mural!
Posted by William Hessian at 11:42 AM

Good work! And I agree 100%. The idea of removing it is ridiculous. It makes no sense. Any reason he could give for this is ultimately stupid. If I lived close enough I'd have to get out and protest this douche move.

Kudos ... it makes no sense to take down the mural ... I hope he comes to his senses!

This is a grand idea. I tried to get the images too and found only medium-resolution shots. Were you able to find hi-resolution images? Whichever res. you've got there: Might you post your composite for easier mass stickerization? If not: After I assemble the best ones I've got I'll post a link here. We can keep it in their faces everywhere they go.

I need to thank Paul LePage for letting me know about an incredible work originally brought into being by an ultra-deliberate act of the People. Here's an excerpt from Maine College of Art President Don Tuski's statement about it:

"In the original call for art, the Department of Labor asked for a mural in which “the value and dignity of workers and their critical role in creating the wealth of the state and nation should be emphasized. In essence, Maine workers should strongly be portrayed as more than an ‘impersonal cost of production.’” It was the responsibility of the art review committee, consisting of representatives from the Department of Labor, to select the proposal which best met these criteria."

Way to go Maine College of Art, and People of Maine!

Now let's put the mural back & Bring Our War $$ Home, but NOT the way Susan Collins does it.

Here's a low-resolution composite I made: http://www.slopart.com/mainelabormural.jpg

and this one is the same only 3 at a time:

Your composite looks nearly identical to mine. It may actually be better resolution. I've got a few hundred stickers to pass out at the draw a thon. Larger images are in the works.

We need to spread these around for people to print and download!