Details and History of 5 drawings 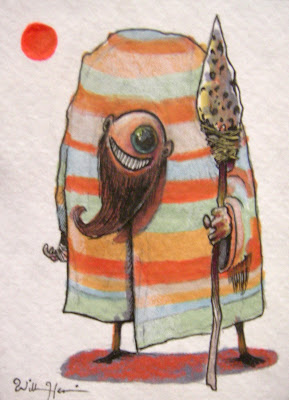 In January of 2011 I drew one drawing per day for the Fun A Day art show. All 31 of the drawing can be seen on my original Fun A Day post. I have been selling these drawings for $30 each (if you are interested in purchasing art contact me) and have sold a handful of them. I was asked to give a few details about 5 of those drawings to better help an individual decide which one to choose. Thanks to Took Gallagher.
The image above was Day 31, and I was a little drained with coming up with a new idea every day and trying to execute it within a limited time period. I decided to make something simple, and something I would like to see. This led to a happy but creepy bald bearded old cyclops with a rock staff. I can imagine meeting him on a quest, and him giving my advice on the road ahead. 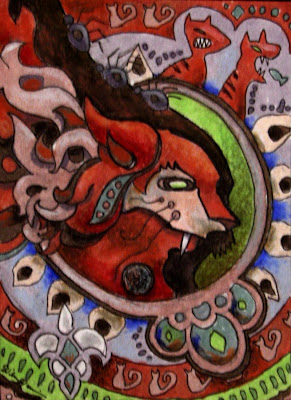 In my head, I often envision intricate geometric designs combined with a central image. I have done drawing like this in the past, but it is always a balance of both mathematical precision, which I often disregard, and repetition. The story behind the drawing is not much beyond just trying to honor the visual concept that often floats around in my head, and the process usually tells its own story. This cat creature seems to have importance, and some sort of story to go along with him/her, but I am not sure what it is. This was draw with a mixture of markers and colored pencils. 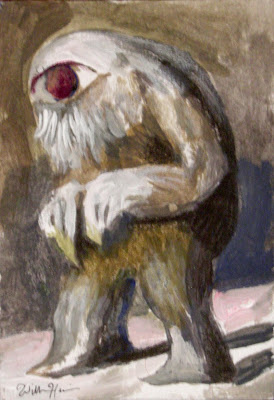 Another cyclops. This time its a hairy bigfoot cyclops. I used acrylics for this one. I have been a little obsessed with painting monsters lately, and there were 4 0r 5 times during the drawing a day challenge that I ended up defaulting to some big monster guy with dramatic shadows. 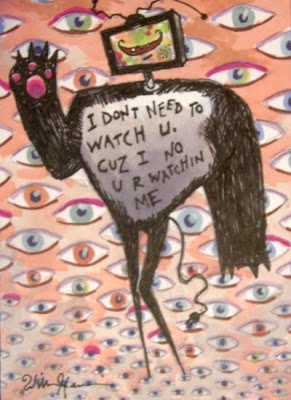 Television. This drawing is one of the most political, and also filled with history. I once started drawing a series of comic strips called Without Heroes. The comic featured normal people interacting in the world with a series of super villains running around making life difficult. One of the villains was this television guy. He could mesmerize and distract people and even brain wash them. The eyeball backgroup was an idea I used years ago in a Paris Hilton painting I did. Of course the eyes represent the idea that everyone is watching. This particular drawing combines a lot of ideas from past projects, and involves themes and ideas I wish to use again in the future. 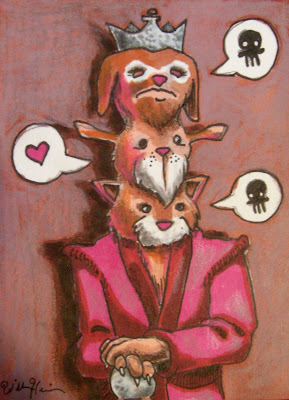 Totem Bears. I wanted to create this king-like figure that had conflict within themselves. As I was making it, I have decided that it was, in a way, a commentary on human beings. How we are all good in some way, but also all bad in other ways. The struggle to be positive instead of negative and share love instead of hate. The drawing did not start out with that in mind, and the little word bubbles were an after thought. I think it become an interesting image.
Posted by William Hessian at 2:08 PM

Email ThisBlogThis!Share to TwitterShare to FacebookShare to Pinterest
Labels: fun a day

Very interesting! Now I have to rethink my list of favorites!