For the last five months I have been working at Cross Trax deli in Unity Maine. If you ever get to Unity, Maine; first of all how in the heck did you end up there? Second of all, go eat at Cross Trax Deli, they feature locally grown products and have a great selection of sandwiches, soups and deli items.

The reason I bring up CrossTrax is because one of my co-workers named Jess, asked me to draw her an alphabet drawing for her two kids. I got to meet both of them on a few occasions as they ran around the deli. I meant to finish this weeks ago, but finally sat down to complete it. Here is the alphabet art. 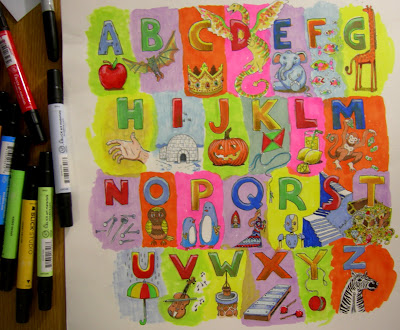 I left the borders on so it could be cropped to fit a variety of frames. I had a lot of fun with the different letters and trying to sneak a few extra things into certain letters. If I had more time it would be fun to do a really elaborate version with as many items that start with each letter in each box, but then again Graeme Base already did that with his amazing book Anamalia. Eleventh Hour was my all time favorite. 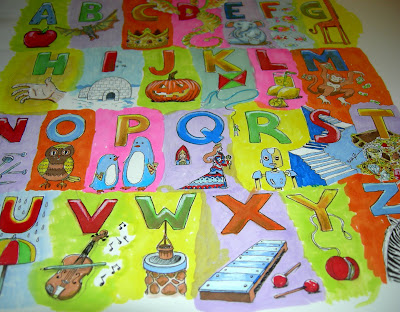 I wanted to slap up a few photos of the cute alphabet, especially since it gave me a chance to mention Graeme Base, who along with Martin Hanford (Where's Waldo) crafted a lot of my childhood dreams.

A is for Always
B is for Blog
C is for Carefully
Posted by William Hessian at 10:39 AM

I could not love this anymore! So fine!

Wish I could go back to pre-school and learn the alphabet all over again!