My final week in Jamestown, North Dakota and on the schedule is ZOOFARI! It is a day camp for kids from 3rd grade to 6th grade and I got see a lot of familiar faces from all the in-school and after school programs I have been teaching here over the past five years. Zoofari was a really unique class because the kids all arrive at the local elderly residence for the morning session, paint giant zoo animals with some of the residents from the building. We had a lot to do on day one: 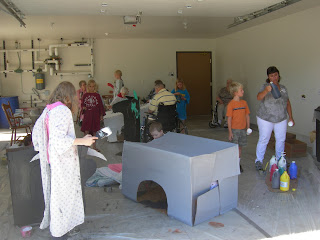 Twenty kids, a dozen zoo animals, and a bucket of paint was too much for the poor little garage they let us use. Despite our best efforts (notice the plastic on the floor) paint found its way all over the place. Each afternoon we would then eat lunch back at the Jamestown Art Center and then play animals games, draw, paint, sculpt animals until time was up. Here's a picture of the girls who bravely tackled the pack of monkeys. They did a great job mixing all the necessary browns to get the job done right: 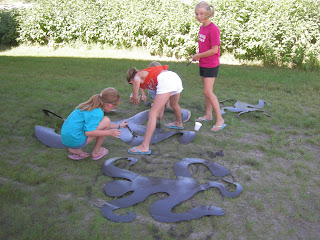 John found himself inside almost every animal. Here he is inside Shelby the turtle. Both him and a group of kids found ways to give this turtle over 15 different colors. Although in the end I think most of them were covered up: 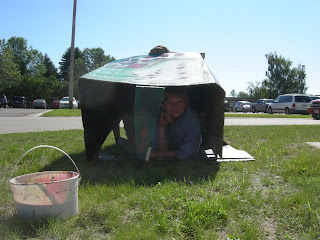 Team giraffe was firing on all cylinders because as soon as they got in their group I barely had to check on them, because they knew exactly what to do. Great team work led to an amazing realistic giraffe. Who would know it started as refrigerator boxes? 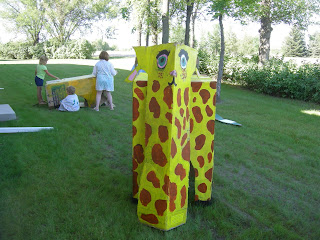 Each group got a reference photo of their animal to help make color choices and put everything in the right place. Madison was in charge of team zebra and she decided her zebra needed a turquoise and yellow head, I think it was a great call: 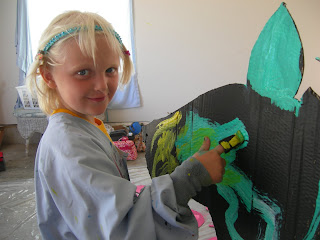 Once the animals started to get finish, and dry we began building a zoo outside the dining room windows for the residents to see. We also found some places to hang monkeys high up in the tree. Here's two of the girls doing the monkey, while their monkey flies in the wind above. 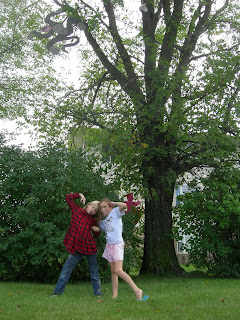 As soon as team gator finished their work, Luca was eating by the gator. Luckily, the gator was board thin, and was on a diet and spit him back out declaring he was too many calories. 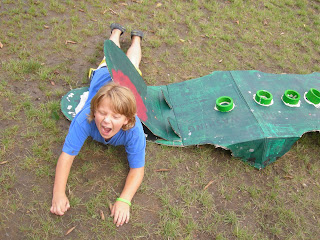 Tawni and a resident help out on the finishing touches of the zebra. The few days when the residents could stop by to watch, or help out it was a blast for the kids. Most days it was either way too hot, or way too wet to work optimally in such a small room, but the two days when things went according to plan it was great. 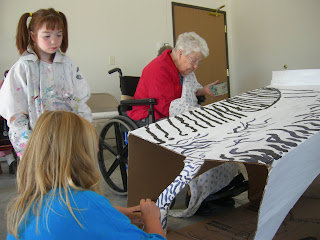 Here's the entire crew! I had such a good (but hectic) time with this class. The kids worked extremely hard to finish all the animals and get them all set up in just one week. Check out that elephant on the right! This photo sums up what a fun group of kids took part in Zoofari. It was a week to remember! 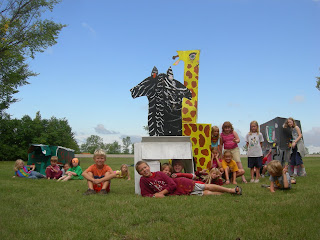 Posted by William Hessian at 7:04 PM