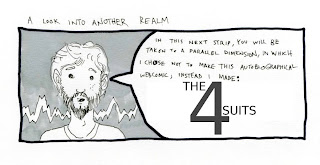 The series of three mafia style comics is based around a bloody storyline depicting 4 mega corporate factions, hearts, spades, clubs and diamonds. Each faction spends most of their time killing off other business men (the discard) in attempt to gain domination over the corporate world. Each strip is only one snap shot in longer more drawn out scenes of which have not, and may not ever be completed. The samples are part of a graphic novel storyline proposal, which sits next to the other storyline proposals I have done over the years.

The 4 Suits is meant to be satirical, and yet flashy and over dramatic in a Quintin Tarentino kind of way. After watching Alice in Wonderland I realize that this storyline has many surreal qualities and metaphors that could be considered similar to Alice in Wonderland.

I hope you enjoyed this look into another dimension of my comic mind.
Posted by William Hessian at 9:31 PM

Love the idea ... I hope more stories are in the cards!