Here's a cute valentines day story (especially if you like sock creatures). My girlfriend, Kelsey and myself both slaved away at our gifts for each other for Valentines. We make an effort to make each other gifts as opposed to buying things. I was teaching a 'soft sculptures' class to middle school kids. I taught the kids to create sock creatures (i will post some of their creatures later on in the month- some really great inventions). During this class I was making Kelsey her Valentines day gift, in the form of a sock creature. I kept it secret from her. 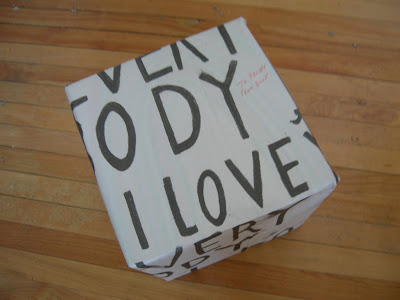 Each night as I slaved away at drawing miniature drawings for my 100 miniatures art show. Kelsey was retiring behind closed doors secretly making my present. Not until Valentines did we realize our gifts were similar: 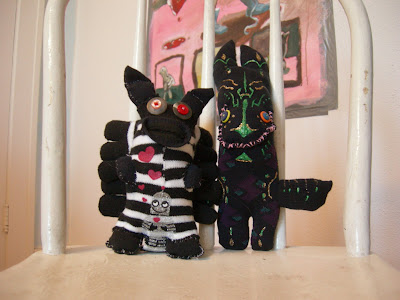 We were both shocked to find that we both created each other a sock creature. Kelsey created the robot alien creature on the left, which I love. The robot was a symbol that was on the Burton-esque pair of toe socks. The toes became the wings. My creation was a more straight forward approach to a sock creature, which I then embellished by adding fabric paint, a technique I plan to repeat in the future. You can find more of Kelsey's sock creature (for sale) and her jewelry creations on Kelsey's etsy shop. You can also see my very first sock creature Petrie who was a featured in "Road Games" one of my art tour videos and has since been sold. 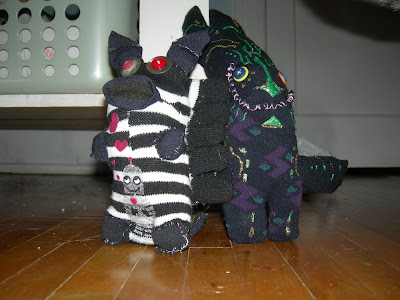 Posted by William Hessian at 11:48 PM

that's so sweet! i tried to make my first stuffed-thing recently. it was a patchwork turtle. i flunked. it is a bit scary looking and the arms and legs are really stiff. ah well.